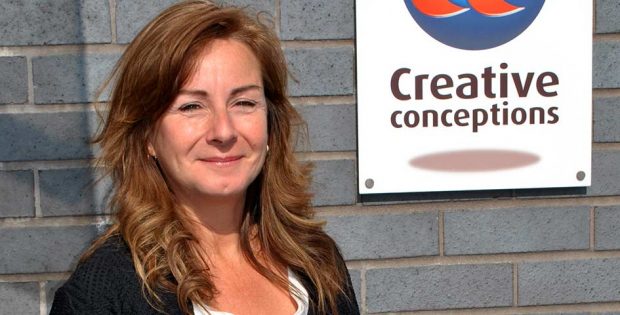 Creative Conceptions released a slew of new games within the last couple of month. Could you give us an overview of the products you are currently offering in this field?
Jane Bowles: We’ve released a number of exciting new adult board games over the past six months including Sex Marks the Spot, Oral Fun and Fetish Fun and Chemin du Plaisir. Sex Marks the Spot is a game of chance where all roads lead to romance and raunchiness as couples indulge in their sexual fantasies and explore one another like never before. Fetish Fun will allow couples to dare to go there and explore their kinky side with an intimate introduction to the world of fetish fun. Oral Fun will tease and tantalise you as you make your way around the board, giving and receiving oral in almost every way imaginable!

This year also sees the re-release of the popular French game, Chemin du Plaisir. Creative Conceptions bought the worldwide rights to this successful game from the game’s inventor Roxane Guidez and we are delighted to have the original French version back in Production. The game has three stages of increasing excitement firstly awakening your desire, and moving through electrifying anticipation, until it explodes in a climax of feverish passion and pleasure.

Our products fall into three key categories, Playtime, Kinky time, and Party time so as to cater for all occasions and moods. Playtime offers Games that encourage fun and frolics between couples. Kinky Time covers soft restraint play garments that allow couples to explore their sexual fantasies and Party Time has hilarious group games and bachelorette novelties to get the party started.

In addition to board games, we have novelty games such as our brand new Predictive Pecker which is a reinvention of the classic Miracle Fish but for the adult sector. Our psychic shaft dick-tates couple’s sexual fortunes by dishing out sex instructions for those wanting to add a little playful fun to their sex life.

All of our games freely enable couples to increase the intensity by inviting them to involve accessories as part of the role play. This is where we not only continue to add value to their experience but increase revenue for our distributors by upselling add-ons. We provide our distributors with add-on sheets itemizing products the game recruits ranging from sex toys through to cockrings. We particularly love our red Quickie Cuffs or SXY deluxe cross cuffs for moments of restraint play.

Although we have a wide variety of games that appeal to many tastes and would tickle the mildest to the wildest of sexual fantasies, we focus predominantly on couples who want to keep their relationship fresh, interesting and fun.

Games are often seen as entertainment for children. Obviously, your games target an adult audience. How do you approach customers to convince them, that games are not “just for kids”?
The simple answer is we don’t need to convince or indeed encourage them. Adult board games are actually a highly searched for term online which is reflective of people’s keen interest in them. Everyone loves to play games, no matter their age, be it computer games, sports or good old-fashioned board games. Humans are visual, inquisitive creatures, that like to engage their senses so where passion and sex are concerned, people would rather play a game than read a book.

Like a book, a game sparks arousal, but unlike a book, which is solitary and unengaging, a game is interactive and allows arousal to be brought to life. There will always be a demand for games that ignite passion and intimacy, especially around those romantic times of year like Christmas and Valentines. For couples, playing a board game removes any shyness and embarrassment as you are on equal, unknown ground being guided by the rules of the game, so no one is responsible for taking the lead. It breaks down the barriers and negative thoughts we impose on ourselves and allows lovers to communicate unabashedly.

How would you describe the typical customer who buys an erotic board game?
I would describe them as you, me, the person reading this article, or the person sitting next to them. We have a game for everyone and until you’ve tried it, you don’t know what you’re missing! Although we have a wide variety of games that appeal to many tastes and would tickle the mildest to the wildest of sexual fantasies, we focus predominantly on everyday couples who want to keep their relationship fun, fresh and interesting. We have games that slowly build up the passion to those that get stuck straight in, so they really suit all levels of sexual explorer from a sex game virgin through to the more experienced devilish types. Basically, anyone who wants to try something new and have fun with their partner!

With dozens of games, we can’t talk about all of them in this interview. But could you point out your current bestseller and explain it in more detail?
We’ve had some huge successes to date with our games, but our consistent best-seller, with year-round sales is actually the first game we ever made and ultimately where the Creative Conceptions story began. Monogamy has sold over 1 million copies worldwide and is now in 8 languages! It gets rave reviews across the board and won an award that was voted for by new mums. Perhaps not what you may expect but to us this reinforces our belief that our games are for everyone, especially those wanting to spice up a relationship that has lost some of its spark.

Most games emphasise fun and playfulness in sexuality. Do you think that this is something that is neglected in today’s market, which seems more focussed on wellness and „serious“ romance?
Yes, absolutely. Everyone wants to have fun but the older we get we seem to forget how, or perhaps we are conditioned to because of all seriousness we have to face. Everything we do at CC is driven by a desire for people to have fun and to enjoy their lives together. I mean whoever said sex shouldn’t be fun, no one, ever. As for wellness, good sex means a healthy relationship and a healthy relationship means happiness! Science even says sex is good for you and may prolong your life!

Many games give players choices for sexual acts the player would like their partner to perform. That’s obviously the goal and the most fun part of the experience. But how important are the actual game mechanics when it comes to erotic games?
The mechanics are hugely significant to the success and interpretation of the game, but they must be almost invisible to the players otherwise they risk ruining the natural evolution of the game and the players enjoyment of it. They must be simple, easy and flow seamlessly. It would be incredibly disappointing and frustrating for couples if they reached a climax only for the games mechanics to fail and ruin the momentum and ultimately the mood! We heavily play-test our games to ensure this never happens.

All of our games take into consideration the different types of people that may play it and the uniqueness of what each of them may want from it and so playing the same game twice can deliver totally different results. Players are in control and can steer the journey in multiple directions.

Could you tell us a bit more about the development of an erotic game?
Monogamy was our birth baby and since then we have utilised many of the same development processes from concept to delivery. My husband and I started by writing all the actions ourselves and mocked-up a dummy board which we gave out to as many friends and family as would humour us. From their feedback, we evolved the game and repeated this process until we were 100% happy and released the first version. It’s a proven process and one we enjoy as consumer feedback through play-testing is the difference between a mediocre game or a raving success. Nowadays of course we have a fantastic skilled team behind of us that contribute their expertise to every unique detail of the game.

Most of the games you offer are available in English. What about other languages? How hard is it to create a good translation for erotic games?
A number of our most popular games are now available in more than one language. Monogamy is in German, Hungarian, Danish, Swedish, Spanish, French and American. You might find it funny of me to say American but culturally they are different to the UK, they have their own innuendos and therefore the game has to speak their ‘language’. When playing an intimate game, you want to feel like it belongs to you, your partner and your culture, therefore, the spirit of the game has to compliment to the players, not just the words. We don’t want people to have to overthink things and so understanding is key. If the language was broken or the instructions misunderstood the connection would be jeopardised which could ruin the entire mood of the game and cause frustration as opposed to blissful pleasure.

Other games in multiple languages are: You & Me in Danish and German, Fifty Nights of Naughtiness in German, Fifty Days of Play in German, Chemin du Plaisir is the French version of our English game Path to Pleasure and we are in the process of having Oral Fun and Fetish Fun translated into German in time for Valentine’s day.

What are Creative Conceptions plans for the future in terms of new games?
We will continue to grow our portfolio and expand the number of games we offer in foreign languages. Many of our best-sellers are yet to be translated so we have big plans to do so. To achieve this, we are very keen to work with distributors who we can grant exclusivity within their geographical area in exchange for their assistance with the translation.

Board games are still a relatively undervalued product in the adult sector, but they open businesses to a huge population that are novices to it. It gets new customers through the door that wouldn’t enter otherwise. Once their interests are spiked, the potential for repeat custom and up-selling comes into play. Excuse the pun… lol!