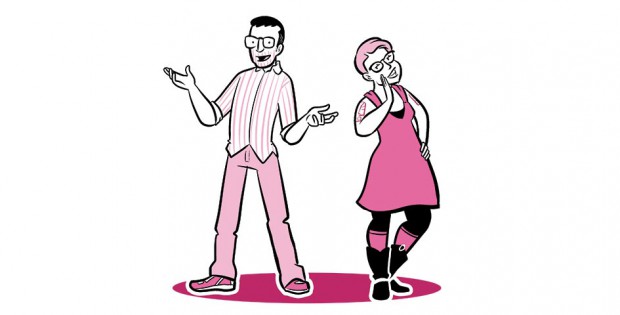 Oh Joy Sex Toy is a free weekly sex education web comic. What were your goals when you started this project back in 2013?
Erika: It had been a while since I had a regularly updating comic and I really wanted to get back into that weekly schedule of producing comics. As for the subject matter, I’ve been passionate about sex education for… lord. Over a decade. My ultimate goal is to help people learn about sex and what their options are in a really friendly, approachable way. I’m making the comics I needed when I was learning about sex.

Matt: It just seemed like the next step for Erika’s comic-making career; comics about sex, education, and sex toys. We didn’t really set out with plans on making something epic. It was more of a ‘let’s point Erika’s creative work in this new direction and see how it goes’. We were very lucky that it grabbed so much traction. I think at a base level our goal was just to get the project to a point where it was paying for itself.

Before we go into more depth about your comics, could you tell us a bit about your background? How did you come up with the combination of comics and sex education?
Matt: A long time ago Erika made a small zine talking about the How To’s of lesbian sex. I thought it was really great and informative. Over many years I kept trying to point Erika into the direction of expanding on this, but it was never really a priority for her. There were other comics to do and a written sex education book to research. Eventually business friend Robert Khoo recommended she point her efforts toward an immediate sex education web comic, it’s something Erika’s fans would understand better than a book, and with that recommendation the idea finally seemed to get traction in Erika’s brain. Oh Joy Sex Toy just sort of evolved from there.

Erika: It’s not so much that I decided to combine comics and sex education, it’s more like… I think in terms of comics. Some people process their experiences and thoughts in the form of poetry or photography or videography or essays or whatever. But for me, my brain translates everything into a comic format. Comics are an incredibly powerful format for education. People can’t NOT read a comic page if it’s in front of them– try it!

We’ve been trained to read text that is overlaid on pictures, be it billboards or cereal boxes or magazine spreads. If I were to write a really thorough paper about sex education, who would read that? A wall of text isn’t very inviting by itself. But when I team up those same points with fun, cute, cartoon-y illustrations? That’s a welcoming combination that people are far more likely to take a chance on reading, even if they’re on the other side of the political divide from me. Comics get read.

“We just try to write comics that we both felt like we needed when we were kids.” – Matt

How do you pick the topics for your comics and how do you make sure that what you write and draw is helpful for your readers?
Matt: Gosh, we just try to write comics that we both felt like we needed when we were kids. I try to make sure the topics are varied and different week to week, and try not to overlook anything.

When it comes to actual comic construction we just really emphasis a non-judgemental friendly funny and diverse space. Think, ‘sitting down to ask questions with your friend at a coffee shop’. “Coffeeshop Erika” is what we try to channel with every comic.

How important are personal experiences for your comics?
Matt: Incredibly important! A lot of fans of the comic come from the days when Erika used to write autobio comics. They are used to having access to a lot of our lives and while sharing our lives is something we still do at more of a distance, it’s incredibly important for OJST. We really want people to grow and know us through the comics. It’s important for them to be able to relate to us.

With regards to reviewing toys and the likes, personal experience is the only way we can talk with any authority.

Erika: Oh, pretty much ALL of my comics are about sharing personal experiences. I mean, there’s exceptions. But 90% of the comics I make are so I can share something real from my life. I’m an over-sharer, I always have been. Thank god I found a way to make a career off it!

Besides the educational content about sexuality, you also make comics in which sex toys are tested. Generally speaking: What makes a good sex toy?
Matt: For us, it’s mostly about functionality and ingenuity. If the toy works, and I mean really works, and is trying something new, then it’s something we get excited about trying. High quality materials and a design that obviously had thought invested into it is key.

For making comics, we like taking toys that are fun to draw and/or has an attribute that lends itself well to making a story from.

You write your comics from a personal point of view, pointing out what works or doesn’t work for you. Which advice would you give to a consumer who is looking to buy a sex toy? How can anybody find out, what works for them without testing dozens of different toys?
Matt: That’s tough to say. I would encourage them to masturbate and explore what they might like on your own. You need to know what your body wants before you can go buying toys, and the best way to do that is by spending a lot of hours in bed figuring it out. With a grasp of their own bodies they can then they can go to a sex positive and friendly sex store to actually see toys in real life. It’s ok to start on the cheap side too, and figure out what really ticks your boxes before investing real cash into the more expensive ones.

If you could give an advice to sex toy designers, what would it be? What type of toy is missing in today’s market?
Matt: At this point, I think I’ve seen it all, and I don’t think there’s a niche not yet filled. It’s probably a tough time for sex toy creators, when the wheel’s already made what do you do next? I guess I would recommend companies start work on getting ready for the next wave of people.

Do you work with manufacturers? Could everybody just send you a toy and hope for a comic review about it?
Matt: We try not to take on too many toys. A comic takes a full week to make, and alongside the education comics and occasional guest comic, we can only realistically get 2-3 reviews done a month! We don’t like to waste anyone’s time either, so we generally just like to take toys onboard that we think will make for a good comic. Companies are always welcome to get in touch with me, but shouldn’t expect me to say yes.

You have just released the third volume of the Oh Joy Sex Toy books. What do you present in these books and why should everybody have them on their shelves?
Matt: Each book is one year’s worth of the website, including sex education, reviews, and guest comics. We’ve been doing Oh Joy Sex Toy now for three and a half years! Each volume is its own unique dive into the world of sex. They work great as a set or as a stand-alone book. If you’re looking for diverse sex positive pun heavy comics this is a pretty great place to go, it’s not the be all and end all of education, but it’s not preachy or in your face either. We just aim to make you feel at home with yourself and learn a little something, our books embody that.

Erika: I think the Oh Joy Sex Toy books would make fun gifts for that person you know who’s been nervously asking you a question here or there about sex stuff and you can tell they’re a bit shy about it. Our books are friendly and funny and their goal is to make the readers feel like they’re included in a conversation about sex and not just being lectured at.

And, as a book lover, I gotta say: our books are really nicely designed. We hired Allyson Haller to put them together and oh my gosh, the layout of the books and the quality of the materials they’re printed on are just [kisses fingers]. They’re just really nice, physical objects in and of themselves. In my humble opinion!

Where can interested retailers turn to if they want to offer your books in their stores?
Matt: The books are available to order through Diamond Comic Distributors, Ingram, and Baker and Taylor.