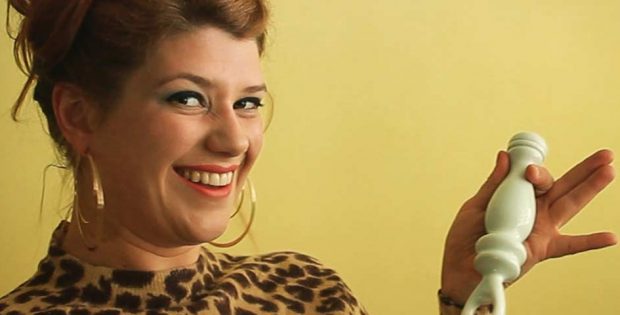 Before we talk more about Prudence, could you introduce yourself to our readers first? Did you have any experience regarding of sex toys before you started working on Prudence?
Ffion Harman: I’m launching a new range of British porcelain sex toys called Fine Bone. Last August I crowdfunded Fine Bone’s first product Prudence and she’s in production as we speak.

My experience with sex toys began five years ago making sugar vibrators for a sci-fi theatre production. For obvious health reasons this had no longevity as a business but it did open me up to a world of moulds and food grade silicone.

I’ve always been in and around the fetish community and sex industry in London and recently Berlin. Attending sex parties, vulva workshops, in general just saying “Yes” to all the weird and wonderful things the kink-world has to offer. Prudence is the result of a five-year exploration into what I (and the people around me) would like from a penetrative sex toy, through trial and error.

My professional background is in events and visual merchandising. So basically designing/ producing things like window displays, press launches and pop ups. It’s one of the reasons that Fine Bone’s marketing is so aesthetically driven. I wanted the branding to be super accessible.

Ffion, you used crowdfunding to successfully finance a ceramic sex toy called Prudence. How happy are you with the result?
Yes, I crowdfunded her first batch on Kickstarter. It was an emotional rollercoaster but very much worth the journey! I took this decision based on the scale of production. I could have self-funded and manufactured the toy a few pieces at a time with an artisan ceramicist but it would have been a completely different product.

Without the campaign Id’ve had to market towards a really narrow band of people that can afford luxury sex toys. This wasn’t my intention. But of course mid scale production meant more money needed upfront to make the first batch. I looked to crowd funding because I knew the figure I needed but didn’t have the stats to pursue business investment. One of the best things that came out of this experience was that it forced me to reach out to people in the community.

Everyone who I have consequently met in the sex toy industry is so talented and supportive. I’m entirely grateful to these people as well as the backers for helping Prudence become a reality.

Prudence has a unique design and doesn’t look like other sex toys. Can you tell us a bit more about the design process and why you settled on the final design we can see now?
That has to do with the “Suck and See” approach. There were hundreds of different amorphous shapes on my kitchen table at the beginning of the process. I tried them all out, redrafting and redrafting until it looked like it does now. This was during the two year primary design phase. I was lucky that I had a kinky household of people who were happy to input and never judged me for my pet-pussy project.

Then I found some talented craftsmen to make a short list of designs in glass and ceramic from my 3D renders. Prudence stood out by a mile. She’s an internal and external massager, primarily for vaginal use. I really like the way the line of the body swells, so when you thrust it deeper, it widens. That and the handle is just …handy!

You picked ceramics as the material for your sex toy. Which properties make ceramics well-suited for this purpose?
I knew it had to be hard and heavy. When you clench against something hard the resistance is so much greater when you orgasm and it helps tone your pelvic floor too. Glazed ceramics are glossy and gently warm up to the touch of your skin. I would have been happy with glass too but the prototype happened to be made on a lathe from porcelain. I have grown to favour ceramic sex toys almost entirely now because they conduct heat in such a natural way and temperature play is a really underrated aspect of sensory pleasure.

There are several companies making toys in the same medium, after all the idea has been around for thousands of years. Other companies focus on intricate paintwork or have a different unglazed surface. With Fine Bone the finish is just clean, simple and smooth. Prudence aims to be the kind of toy one can keep on their bedside table.

You chose to have Prudence manufactured by a company in Stroke on Trent. Which criteria mattered most when you were looking for partners for this project?
The Stoke on Trent potteries are the historic centre of the ceramic industry in the U.K. I reached out to them because they are iconic. I liked that it fed into British industry but more importantly I wanted to stay in close communication with whoever was producing the toy. It seemed fitting with the tongue in cheek feel of the branding that it be produced in an area of the world famous for making the queen’s tea cups more than dildos. Very wholesome indeed.

On your Kickstarter campaign page you say that you want Fine Bone to be an ethical company. Why is this aspect so important to you and how is this reflected in the product?
As an individual trying to start a company, I feel responsible for how that’s done on every level. If I have the chance to do it right, I want to. The environment is one thing, ceramics are a natural medium. They are compatible with your body and sustainably made. The cotton travel pouch Prudence comes with is made with a women’s co-operative who work with victims of sex trafficking. The aim is to give these women a choice of how they make their income. Across the board sex is only sex when it’s empowered and consensual, that extends right from freedom to pleasure oneself to freedom from forced sex labour.

One of the main motivation’s for making my own sex toy company was that I felt alienated by what was out there. This is beginning to change but many sex toy brands are still using sultry black and white photographs of nubile, long-haired, white-skinned models to promote their campaigns. The view of what sexuality should look like is still very contrived. More to the point it always looks smouldering and never fun. In my opinion someone’s laughter is so much sexier than their pouty selfie face because it’s genuine. I want to carry this honest sexuality into the brand’s ethos.

Which audience are you targeting with Prudence?
I’m hoping to target people who have an interest in sex as part of a healthy lifestyle and enjoy intimacy in everyday life. Fine Bone products should be marketable towards the health and beauty sector as well as appealing to a socially conscious shopper. Initially, I thought that it would be a millennial target audience, but feedback has shown that it’s actually most popular with the 35 – 45-year old age bracket. After all women’s sexual peak is in their thirties. I think there’s been a shift in the way people talk about sex openly. Instead of buying a new pair of shoes or lingerie, I would love it if Prudence was the kind of treat someone would buy themselves to kick off the perfect weekend.

When will Prudence be available on the market and how much will it cost?
Prudence is in production at the minute and I want to ensure the she’s completely perfect before I properly launch the company. I should have the product safely in my hands this Spring. However, I’m planning to launch the business around Autumn 2019 with a web shop and a handful of stockists in different countries. The retail price is currently £64.00 which comes in less than competitors in the ceramic field and aims to be beautiful without being a high end designer item.