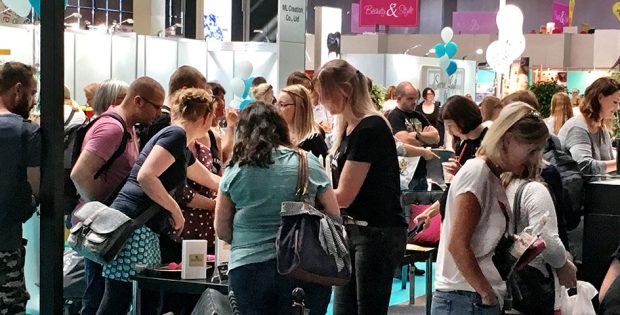 ‘Modern Feelings’ is the name of a newly created theme area that was introduced at the latest infa – the big information and sales exhibition in Hanover – on October 13 to 21. This theme area boasted roughly 1000 square metres of exhibition space, all of which was dedicated to topics such as sexuality, sexual wellness, and sensual lifestyle. In line with the motto ‘eroFame goes public’, various companies from the adult industry presented their brands and products at this big joint stand. But how did the visitors of the show respond to this new idea? Wieland Hofmeister, head of Mediatainment Publishing eroFame GmbH tells us more.

The ‘eroFame goes public’ concept debuted at the information and sales show infa on October 13 to 21. Are you happy with the results?
Wieland Hofmeister: Absolutely. You mustn’t forget that this concept – namely a ‘clean’ b2c event for the adult market – was incorporated into a big consumer show that had traditionally given wide berth to anything concerning sex or sexuality. So, I feel we have laid an important foundation, and things are looking great the future of this concept.

The people of Hanover – and northern Germany in general, really – have a reputation for being a bit reserved. How did you manage to break the ice when it came to topics like sex toys, etc.?
Before the show, we couldn’t really be sure how the consumers would respond to our presentation. infa has been around for many years, it has a reputation, and many women visit the show with friends or family without really having expectations; they just stroll through the fair halls and see what the exhibitors are presenting. On both weekends of the event, our joint stand was basically bursting at the seams as thousands of visitors visited our ‘modern feelings’ section of the show. And better yet, they were very open-minded and highly interested in what our exhibitors had to offer. Not even we had expected this concept to be such a resounding success right from the get-go, so it was surprising and thrilling to see all those people at our joint stand.

There was also an entertainment programme for the visitors of your ‘modern feelings’ theme area. How exactly did you entertain the consumers?
Apart from what the exhibitors offered at their stands, there were fashion shows, discussion forums, lectures, and live music performances on the stage – the latter of which created some additional interest, luring more people to our joint stand. Furthermore, we raffled off toys, there was a cocktail bar, and our exhibitors had lots of tips and advice for the visitors. And every time there was a scheduled performance or presentation on our stage, large crowds of visitors gathered to watch, which was a very pleasant surprise. It definitely shows that there is a lot of interest in the products our industry has to offer.

Your concept of a joint stand for all the different companies and brands was put to the test at infa? Did the results meet your expectations?
I would say that this was a really great first step. The ‘modern feelings’ area was about 1,000 square metres, and we hope to have a much bigger presence next year as more companies from our industry will hopefully see the merits of this idea and decide to join in on the fun. As for the concept of a big joint stand: We want to build on that to create a fair within the fair – a b2c show for erotic lifestyle products and brands that appeals to the consumers, predominantly the female target audience.

There were eight exhibitors at the joint stand. How satisfied were they with the show?
Everybody needs to understand that this was our very first foray into the b2c segment, and we will make good use of everything we learned during this ‘test run’ to optimise the next shows. There are some big winners among the exhibitors who had some really great days at the infa show, not only in terms of sales but also in terms of brand-building and product branding. We have actually documented this interaction with the consumers at the stand in the form of photos and videos. Of course, this is not a hardcore adult show like Venus in Berlin, which attract thousands of male visitors with very specific expectations. No, ‘modern feelings’ is catering to a wholly different consumer group, as I already mentioned before.

We want to get the attention of women and couples, including people who may have never seen the interior of an adult store before, who may never have ordered a sex toy online. You have to find the right way to approach this group and introduce them to the world and advantages of sex toys. The Orion stand was a perfect example of this: The personnel at the stand was all female, and they approached interested consumers individually and very openly. If you don’t engage the consumers and invite them into this world, you run the risk of being overlooked.

Have you already received feedback from the organisers of infa? Were they satisfied with the consumers’ reaction to the ‘modern feelings’ area?
First of all, I want to thank the organisers of infa on behalf of all the companies that presented their products at the ‘modern feelings’ joint stand. They really know how to put together a great show. That said, there was a certain level of skepticism about integrating erotic products when we first approached them. But ultimately, they trusted us to create an inviting, clean presentation that wouldn’t upset people or scare off the more conservative ones among them.

You already stated several months ago that the ‘eroFame goes public’ concept would be continued next year, but you also said there would be changes. So, what will change, exactly?
The first ‘modern feelings’ has shown that there is definitely interest in a ‘clean’ trade show for the adult industry that meets the standards of the modern lifestyle. It is up to our industry to respond to that interest and take the next step. It is simply inacceptable that many people in today’s society still equate adult products with porn. There is so much dormant potential out there, and it is high time for a wake-up call. We need to open these people’s eyes to the advantages of healthy sexuality and show them how beautiful and exciting their sex life can be, whether they’re alone or with a partner. Our presence at infa has only been the first step.

Next year – and probably also the year after that, so 2019 and 2020 -, we are going to book a ‘modern feelings’ stand at infa for the weekend right after eroFame. And before you ask, yes, that means we will only be at the b2c show for one weekend. We expect that most exhibitors joining up for ‘modern feelings’ will also be presenting their products at eroFame, so this scheduling should be perfect for them: There will be no waiting after eroFame, and presenting your products on the first weekend of the consumer show should definitely be enough for successful sales and brand-building.

Would it be conceivable to introduce the ‘eroFame goes public’ concept to other cities or other consumer trade shows?
Let’s not put he cart before the horse. For the time being, we will focus on establishing ‘modern feelings’ at infa and expanding this concept one step a time. Good things take time, after all. But since you’ve asked, we’ve actually received queries from ‘Consumenta’ in Nuremberg, which is basically the southern German counterpart to infa – and they seem to be very interested in working with us …