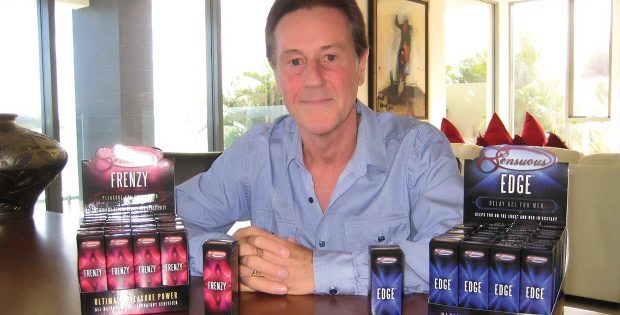 Arduous, time-consuming, full of uncertainty – this is how Sensuous’ struggle during the past months could be described when the Australian company had to fight for the trademark rights to two of their own products – Edge and Frenzy – in China. Keith Jones, co-founder and CEO of Sensuous, tells EAN how this unusual story unfolded.

When did you realise that one of your Chinese distributors was counterfeiting and even sought to get trademark rights for two of your products, Edge and Frenzy?
Keith Jones: We had been exhibiting at a show in Hong Kong and invited our China distributor to be on our booth with us. We had agreed that any leads or orders for China would be theirs. There was a lot of interest at the show and we knew that we would have to get an order within two or three weeks after the show in order to fulfil the show sales. Three weeks later orders were still not forthcoming, so I emailed our distributor, but I didn’t get a reply. I then checked their website and was horrified to discover that they were now displaying their own version of Edge and Frenzy, but even worse than that, they were still claiming that we were making the product. They were also using all our promotional material and to add insult to injury, they were displaying pictures of us all together at the Hong Kong show, like one big happy family!

Did you seek a dialogue with this distributor, with whom you had been in a business relationship prior to this situation?
Due to language differences most of our communication had always been through email. I emailed them several times, but no replies were received.

You employed the services of trademark law specialists to prevent this distributor from acquiring trademark rights for their counterfeited products. What results did this action yield?
We actually employed two trademark lawyers, one in Australia and one in China. Obviously, this was a lot more expensive, but I really don’t think that we would have got a positive outcome with just using the one. The two of them were able to bounce ideas off each other and the Australian lawyer was extremely instrumental in helping us collate our evidence. Initially we were not able to stop the process of our distributor’s application and even if we did we would then still have to apply in our own right and at the same time they could also reapply.

There was sufficient proof that Sensuous had already asserted the trademark rights in China, long before said distributor attempted to do the same. Was that not sufficient evidence for the Chinese authorities?
We had to prove first use and that meant showing evidence that we had used the marks in China before them. We had bucket loads of evidence. This included, all the email communications we had had with the distributor, proof that we had exhibited in Shanghai, screen shots from their dodgy website, magazine advertising and more, but incredulously every bit of evidence we put forward we were told that we could be making it up and that our documents could be fraudulent.

“We had bucket loads of evidence.”

Did you worry that the Chinese authorities could be biased in this situation?
I’m not sure about that, maybe it’s more of a cultural difference.

After some time, the Chinese authorities accepted the evidence you had presented. However, that is not the same as winning this trademark dispute. Could you explain why not?
Eventually we got a letter from our local council – the Chinese authorities put great stead into evidence from official government bodies – stating that Sensuous had accompanied the council on a trade mission to China long before our distributor had applied for the trademark. With all our evidence finally submitted it still took over a year before we got any judgement and over another year before we were awarded the trademarks.

How much time did this whole procedure take up?
Over three and half years.

Did you ever think about striking your colours and withdrawing from the Chinese market?
That’s exactly what we did do, in fact we made the decision that while this whole thing was going on we would do nothing in China. Without some sort of protection, we could see ourselves always being in similar situations with battles to fight.

So, what is the situation right now? Will all the counterfeit products be taken off the Chinese market?
Unfortunately, it’s not as simple as that. Having the ownership of your own brand is one thing but policing it and enforcing it is another matter entirely. Think of all the counterfeit brands that are out there, handbags, watches, sports gear, sunglasses, and so on. Big companies with much deeper pockets than ourselves have the same challenge and they still haven’t found a way to stop it.

“Having the ownership of your own brand is one thing but policing it and enforcing it is another matter entirely.”

Can you gauge how much this action against product piracy cost, or how much damage the counterfeiters caused?
Tens of thousands of dollars in lawyers’ fees and potentially hundreds of thousands in lost revenue. It would be impossible to put a figure on the damage done, but we do know from feedback that damage had been done.

What is your strategy for the Chinese market going forward? What are the lessons you have taken from this unfortunate situation?
We will certainly tread carefully and try and make sure that we work with trusted partners in the future. We will also look at doing more ourselves on Chinese platforms such as Taobao. I guess the one important thing to take from this is that not all cultures work and think in the same way and one person’s integrity is another person’s opportunity.