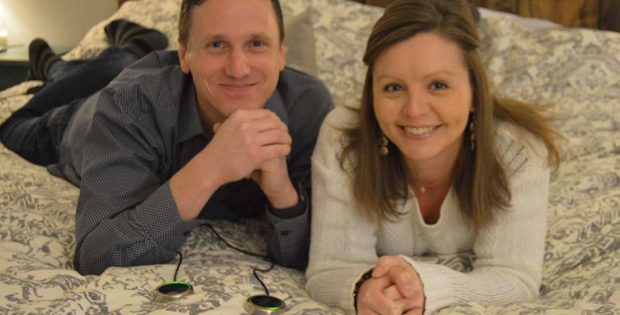 Sex can easily be marred by insecurities, even in committed relationships. What if you are not sure whether your partner is in the mood right now? Do you still make the first move and risk being rejected? Does that put pressure on your significant other? These issues and questions have been bugging Ryan and Jenn Cmich for a while. Their solution is LoveSync, a nifty product that, with just two little buttons, helps partners signal to one another when they are in the mood and when their advances might be turned down. In our EAN interview, Jenn Cmich talks about the product and the advantages it offers.

LoveSync is a pair of buttons a couple can press to signal that they are in the mood for sex. Would that sum up your product?
Jenn Cmich: Yes, but the key feature of LoveSync is that your partner will only know if you are in the mood for sex if they are, too.  LoveSync is different from sending your partner a sext or any of the other more conventional ways of signalling you partner, because with all of those methods you are putting yourself out there without knowing if your partner will reciprocate. LoveSync removes any vulnerability that’s associated with making the first move. If just one partner taps their button, the buttons don’t light, so the other partner is none the wiser. However, if both partners tap their button within a set timeframe, the buttons glow, signalling that you are both thinking the same thing. LoveSync is simply a new, nonverbal way to communicate romantically with your partner. It makes connecting easier by eliminating mixed signals or trying to guess if your partner is in the mood, resulting in more frequent intimate encounters.

How did you come up with the idea of creating LoveSync?
My husband and I, Ryan, are co-founders of LoveSync and it was Ryan’s idea. We consider ourselves a pretty mainstream couple, happily married with a healthy sex life. That said, we have children and jobs and a busy life that was leaving us less connected.  One night as we were lying in bed Ryan was feeling a little frisky, but also tired from the day.  He wanted to have sex but wasn’t sure how I was feeling and didn’t have a lot of energy left to ‘get me in the mood’. That’s when he thought ‘what if there was a way to know if she’s thinking the same as me without having to ask every time’, and the idea was born.

Did you have any previous experiences in creating products for couples? Could you share your background with us?
No, we don’t have experience creating products for couples. Ryan is a mechanical engineer and does have experience creating consumer goods, but not in this industry. I have a marketing and sales background and am currently an Operations Manager for a marriage and family counselling practice.

What were the challenges you had to overcome to make this product a reality?
Conveying the real value of LoveSync is our biggest challenge. LoveSync is a completely new idea, there’s nothing else on the market like it, so getting people to understand how it works and why it will improve their relationship is something we’re constantly working on. Stephen Colbert called it ‘Tinder for couples’, which is about the closest comparison there is. As a totally new idea it will take some time to shift people’s perspective. When online dating was first introduced there was a stigma with, with people thinking only loners living in their parent’s basement would need it right?  Eventually there was a culture shift and now it’s the most common way couples meet.  We’re excited when we get opportunities like this to have a real discussion about the value of LoveSync, to put us one step closer to that cultural shift.

After a successful crowdfunding campaign, you shipped the first batch in August 2019. How was the feedback you’ve gotten from your customers?
We’ve received some really positive feedback, with the main theme being similar to what Ryan and I were feeling – a lot of couples were generally satisfied with their sex lives before, but LoveSync has helped them uncover many more opportunities for sex that they didn’t even realize were there. Also, that having a non-verbal way of communicating their desires is really something they needed and didn’t know it.  Many in long-term relationships have said that LoveSync has added a sense of anticipation back into their sex life that they’ve been missing for a long time. After using LoveSync, you realize how fulfilling it is to know that your partner really wants you in that moment and that they’re not just going through the motions because you initiated. For those more reluctant to discuss their desires with their partner, we’ve heard LoveSync actually makes conversations about sex easier, as it acts as an icebreaker on the topic.

Critics might argue that your product hinders communication, which is important for every relationship. What’s your reply?
Yes, our most common question is ‘Why can’t you just ask your partner if they’re in the mood?’ Our answer is, you can and you should. LoveSync is not meant to replace conversation, talking with your partner is an important part of maintaining a healthy relationship.  LoveSync simply offers an additional means of communicating your desires to your partner.  Land lines, cell phones, texting and social media have all made connecting to your existing social network easier, which means most of us communicate with our family and friends more than we ever used to. LoveSync does the same for couple’s sex lives.

Also, LoveSync is not meant to be the only way of initiating.  After a romantic dinner with no distractions, for example, it’s likely that one thing will lead to another and the evening will have a happy ending. LoveSync is to help out on those more routine evenings, when there’s a lot of other demands on your time and attention and sex isn’t top of mind.  When you’re only feeling energetic enough to make the first move if you knew your partner would be receptive.  In those situations, LoveSync offers discretion with regard to sharing your desires.

One of the key reasons online dating has displaced family and friends as the most common way couples meet is because people don’t want to share their dating preferences with their Mom and friends. In the same way, many people don’t want to share their every sexual impulse and desire openly with their partner. With LoveSync, you can act on every impulse, knowing it will only be shared with your partner if your impulses match.

With LoveSync, our goal is to fill that gap and utilize tech to help couples connect more with each other to build a stronger, more satisfying intimate life together.

You are currently working on an app version of LoveSync. How far along is this project?
We are working to offer LoveSync as a mobile app. We’ve received a lot of feedback from couples that love the idea behind the technology, but the buttons won’t work for their particular living situation (they sleep in separate bedrooms, go to bed at different times, etc).

So, we are developing an app that will have all of the same functionality as the button but will allow couples to utilize it from their smartphone.  We’re shooting to launch the app in early 2020, if folks are interested, they can subscribe at lovesync.com/app to be the first to know when it’s available.

Will the app have new features?
Initially, the app will have all the same features as the buttons, but we have pretty extensive plans for lots of new features that will be added over time.

Where can retailers in Europe turn to if they want to offer LoveSync in their stores? Are you working with distributors in Europe?
Currently we are only selling direct to consumer via our website.  We are certainly interested in retail and/or distributor opportunities with the right partners.  We do see that a significant portion of our sales to date have been to customers in Europe.

What can you tell us about your plans for the future of LoveSync?
We are focused on and excited about the launch of the app. As a free download, it will allow anyone to try the LoveSync technology and experience it’s benefits for themselves, which is so powerful.  Once the app is live, we’ll focus on prioritizing and implementing our new features that will help couples not only connect more, but also in more satisfying ways.