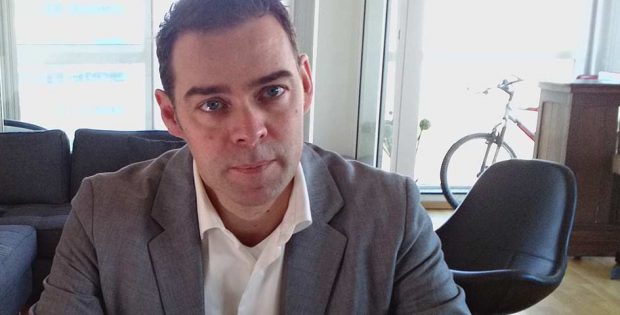 Kiiroo recently released the new Pearl2 and Onyx2. Why was it time for an update?
Maurice op de Beek: Well, it has been 2 or 3 years since we released Onyx and Pearl, and since the release of those products, we have received a great amount of feedback to help improve our devices. We created surveys, user testing and more to help us create the second generation of our devices. The biggest reason was that we have learned to build the devices more cost effectively, and so the end consumers will greatly benefit from the price decrease and quality increase!

If you had to pick one improvement in each product, what would you say is the biggest difference between these and the first-generation products?
With the Pearl2, we have created a device with more impressive touch-technology that encompasses a motor almost double as powerful as the first Pearl.
Onyx2 also boasts a more powerful motor, but I would say my favourite improvement is the fact that the Onyx2 is more silent than Onyx. We no longer hear this mechanical robot sound we heard before.

What was the most common feedback you received for the first-generation products? How did you implement this feedback in the new models?
We are listening actively to what our customers tell us. We are constantly improving our products and like Tesla, we can remotely update our toys to add new features or fix bugs. The feedback we got from the Pearl was that it was not fully waterproof, the motor could be more intense and that the touch could be more responsive. We have addressed all these points and in addition to that we think we have created a beautiful design. The Onyx feedback was mostly on sound and speed of movement. We have addressed both of these concerns in the new Onyx2.

Onyx2 could be described as a high-tech masturbator. Would you mind telling us more about the product and it’s (new) features?
Onyx2 has had an aesthetic makeover, it’s a little bit bigger, but this is because it has a more powerful motor. The colour has also changed, it now has a larger silver stripe at the base of the device, and the charging port has been moved I order to avoid getting lube in it.

Was there a feature you would have loved to implement in the new versions, but weren’t able to integrate into your design?
We have a lot of new ideas, but we rather leave that surprise for next versions!

Kiiroo is planning to cooperate with the company OhMiBod. What will both companies work on together?
We have been creating three devices with OhMiBod for the past few months. Two of them you will see very, very soon, (Early October) and the third is still in the works. All devices will be OhMiBod powered by Kiiroo, so they will encompass all of our technology from touch-sensitive to compatibility with other devices and content. The great thing about this partnership is that both companies bring such banging features to the devices, the colours, the lights, the technology… truly, a match made in heaven.

Right now, most teledildonics devices are not compatible with devices from other developers. Do you think this will change in the future, creating a more dynamic ecosystem?
We have opened our technology so that other devices are compatible with our technology. On FeelMe.com you can see some devices that are already compatible, with a few more on the way. By the end of this year, there will be at least 6-9 more devices added to the list.

Have the possibilities of sex-tech and teledildonics reached the minds of the consumers by now, or are most people still surprised about what is possible today when they find out about Kiiroo?
It’s hard to say, but we have taken part in more out of the industry type events such as South-by-South-West SXSW in Austin Texas where we released the Fleshlight Launch Powered by Kiiroo, and we will be attending the World Fair Nano in New York City on the 16th and 17th of September 2017. Toon Timmermans, Kiiroo CEO will be speaking on the Future of Intimacy at the event, and it will be streamed live in 360 degrees (technology, right?). We are actively trying to reach the people we would never normally reach through the industry related events.
But yes, there are a lot of people in the world, so every day we are still surprising new people with the capabilities of the technology, and what the future holds for the technology.

Some people say that high-tech sex toys are just expensive gimmicks, with no real added value. What would you respond to these people?
Don’t knock it until you’ve tried it, right? The experience is mind-blowing, especially with VR. Leaving the least room for minds to go elsewhere, especially if your immersed in a VR sex scene with your interactive device. The devices mimic exactly what you see on the screen, going up and down and the speed, tempo, length that you see on the screen of on your VR glasses.
For long-distance relationships, or people who are not physically able to be intimate with one another, the technology holds great potential for physical connection. Even if it is not full on contact, even the remotest sense of touch aids relationships.

Technology is changing and developing faster than ever before. Which developments do you see the future of teledildonics?
Teledildonics will become more advanced with more subtitle movements and control and it will become more intertwined with media such as games, video and VR to create an even more realistic experience. We will see content made especially for the interactive toys and that interactive videos will control multiple toys at the same time to enhance the experience.

In your opinion, does the adult market offer enough incentives for companies to invest in future technologies and R&D instead of just tweaking products that have proven successful in the past?
The erotic toy and content industry is a very exciting place to be right now. There are lot of developments happening in both industries looking at ways to make their content interactive. Toy companies are catching on the idea that suddenly there is another revenue stream from the content market and at the same time content companies are seeing that they can start selling toys that would actually work with their content instead of pop-up ads. Pornhub for example is one of the biggest sites in the world has 1 billion visits every month. This can bring huge opportunities for toy and content manufacturers. Male sex toys always have a stigma that it is only used by lonely men, but we see that this is changing. Suddenly really cool technologies connect with sex toys and it is becoming more and more exciting and interesting to talk about it. The sex toy industry has mainly focused on females, but we think that technology will break open the male sex toy market.

How could sex toys benefit from developments in other (technological) fields? In which fields do you see the biggest long-term advantages?
We are constantly looking at what is happening in the mainstream space, and we evaluate if can we apply these technologies in our products or platform. Mainstream technology companies do not want to be associated with adult companies, but they see that it is too much of an opportunity not to be involved.

Tags:Sex Tech
Back to Front Page