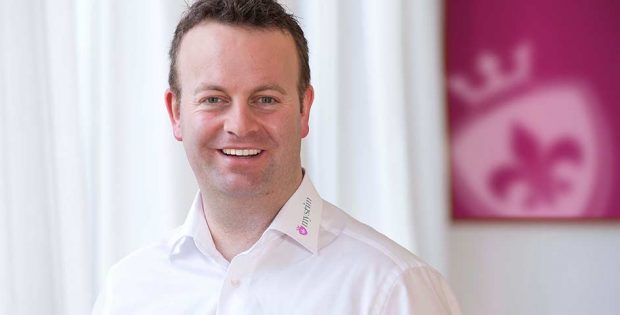 Let’s start at the beginning: Most Germans are probably familiar with the name Micaela Schäfer, but for the sake of our international readers, would you mind telling us more about her?
Christoph Hofmann: It is true, most people in Germany know Micaela Schäfer as an erotic model and celebrity. The former ‘Miss Maxim’ and ‘Miss Venus’ became famous when she participated in the first season of ‘Germany’s next Topmodel’ in 2006, followed by countless appearances on national television, including realtiy TV formats such as ‘Big Brother’ and many others. She has been a prominent figure at Venus in Berlin for several years, she is a DJ, and she is well-known for her sexy publicity stunts that get massive press coverage.

How did this collaboration between Mystim and Micaela Schäfer come about?
We met Micaela a few years ago at the Venus show; at the time, she was accompanied by a camera crew, presenting the latest sex trends for a German TV show. Among other things, they also shot a segment at our stand. Right from the get-go, we got along very well with Mica. She has always been very down to earth, very friendly, very professional, and very intelligent – qualities that seem to be in short supply among many other German TV personalities.

How do you make a signature masturbator? Could you take us through the process, from the initial talks to the finished product?
Once we had approached Micaela about the project and she had said yes, things moved along very quickly. We met to make the moulds (a process that was filmed by a professional camera team), and we did a photo shoot and also shot some video footage which will be presented online and in the form of POS materials.

After that, the project entered the ‘normal’ product development phase, i.e. we made a 3D scan of the mould, created the first 3D prints, designed an early prototype, which was then improved, followed by a refined prototype, more fine-tuning, more prototypes … until, at long last, we arrived at the final design from which we created the final product.

Was it hard to get Micaela on board? After all, this process revolves around a very intimate part of her body?
Micaela is definitely not a prude but having someone make a cast of your intimate area is definitely an unusual situation. It wasn’t like we coaxed her, though. We had been on friendly terms for several years, and Micaela had a certain degree of trust in the Mystim team. I don’t think this collaboration would have happened had it not been for this existing relationship. As I stated before, we are very happy that Micaela agreed to work with us, and we are very proud of how Opus Mica turned out.

There are rumours that Micaela Schäfel had already been approached by a well-known erotic brand before whose goal was to create a toy in collaboration with her. However, Micaela turned the offer down. Is that correct? And doesn’t that make her collaboration with Mystim even more special?
We have heard that rumour as well, but I don’t know any details. Be that as it may – your question was, are we happy that an extremely well-known German celebrity agreed to be the model for our Opus? The answer is a resounding yes!!! Happy doesn’t even begin to describe how wonderful this is for us.

“Are we happy that an extremely well-known German celebrity agreed to be the model for our Opus? The answer is a resounding yes!!!”

Apart from the anatomical cast of Micaela Schäfer, does the Opus Mica have other features that set it apart from the original Opus?
Several features of the Opus E have remained untouched, but the Opus Mica boasts several improvements over the original model. Also, we made the deliberate decision to move away from the electro stimulation feature for this toy. Micaela has a very broad fanbase, many of whom may not be interested in e-stim.

What’s remained the same is the realistic sleeve material; and of course, it is still free of plasticisers and PAKs.

We went with the matte black case with crystalline structure, but we worked on the functionality. Now, you can modify the tightness of the vagina by exerting pressure on the masturbator. We have included a regulator for the air intake, creating an intense suction effect that can be adjusted seamlessly by the users. And if you want to have fun with the Opus Mica without having to use your hand, you can combine our second-generation masturbator with our new wall mount, ‘Captain Hook.’ It sticks to any smooth surface, making it super easy to simulate your favourite positions.

What are your expectations regarding Opus Mica? Obviously, Micaela Schäfer has lots of fans and followers. Do you think that many of them could also become fans of Mystim?
At the very least we hope that a larger group of people will become aware of our brand and our products. Will they become Mystim fans right away? Well, I guess we’ll see.

Signature products have been successful in the United States for many years. However, there doesn’t seem to be nearly as much demand for these products in Europe. Why is that?
I remember, when we launched our first Opus in October of 2018, it didn’t take very long for customers to start asking about sleeves modelled after German porn stars and cam girls – so I have to disagree with you on that one. There is definitely demand here in Europe. The way I see it, the real problem is that no European company has ever gone about it the right way. It is only logical that an American producer would focus on well-known American stars. All we need is someone who focuses on the European market and European stars.

How do you intend on advertising the new product? Will Micaela Schäfer be part of your advertising and promotional campaigns?
The official presentation of Opus Mica will take place in October, during eroFame and Venus. That’s when the trade members and consumers will be able to take a closer look at ‘little Mica’ in all her glory. Of course, we’ll have a variety of POS materials for our retail partners, ranging from shelf talkers to posters and banners.

There will also be a life-sized display of Mica, an ad video, and the aforementioned POS video. As far as Micaela herself is concerned, she will present the Opus through her own channels, and we have plans for several promotions with her. Generally speaking, we will do our best to create awareness and positive PR to support the launch.