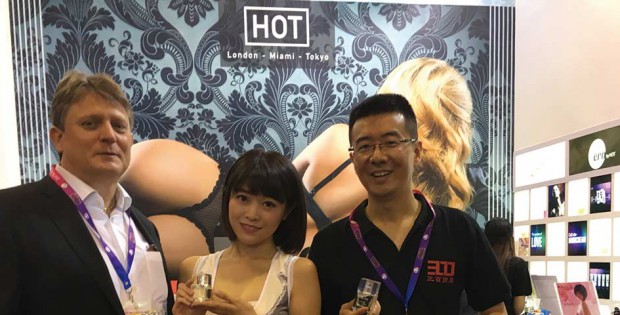 If the Chinese economy continues on its current trajectory, it will be the world’s biggest industrialised nation by 2050, according to expert predictions. Given the size and potential of this market it is no surprise that many companies try to sell their products in the China. That also goes for companies in the adult segment – such as HOT Productions & Vertriebs GmbH. Only recently, the German brand entered into distribution agreements with Chinese companies in the brick and mortar and online retail segment. Michael Sonner (left in picture), HOT General Sales Manager, tells us more in our EAN interview.

Michael Sonner, your company has signed distribution agreements with several major players in the Chinese market. How would you describe the current position of HOT in China?
Michael Sonner: We have put in a lot of work and, over the course of the past year, managed to firmly establish HOT in the Chinese market. Our quality products are well-presented in both, brick and mortar and online shops, and we have definitely found the right partners in this market.

Is it right that HOT moved their Chinese office to a new city?
Yes, that is correct. Four months ago, we moved the office south to Guangzhou. Setting up shop in Beijing first was no mistake by any means; it was the right thing to do because of the permits, licences, etc. But in the long run, the smog situation in winter became unbearable for us. Conditions are much better in the south.

What does this step mean for HOT and what are your expectations?
It is another step on the way to laying the groundwork, a process that is far from over. Investing in marketing only makes sense when your products are available in enough stores so the consumers you are addressing can also get them in their neck of the woods. We have great expectations for this market. It is still in its formative years, but already now, sales figures are very satisfying.

Do you also have products that are tailor-made for this market? What do the Chinese consumers expect from adult products?
On principle, we try to sell our products as they are, without any changes or modifications, but sometimes, we have to tweak them a little to meet legal requirements.

How much work is necessary to offer products such as HOT’s in the Chinese market? Are there laws, regulations, limitations that make entering this market difficult?
The differences between China and other markets are generally not that big. There are rules and regulations, just as there are in Europe or anyplace else. However, the level of corruption you encounter is pretty insane. Being in the right and being declared right are still two different things in China, and often times, there is no way around greasing the wheels.

“Being in the right and being declared right are still two different things in China.”

HOT is well-known for supporting retailers with sales-promoting materials, etc. Do you also offer such trade support in China?
Our plan is to take the same route we’ve taken in other markets, and we also visit the trade members in their stores to better support them. For most Chinese retailers, that is a new experience, and they really seem to appreciate it.

How far along is the Chinese adult market compared to Europe?
The online business is massive – it’s already bigger than the European online market. In the brick and mortar segment, things are only just picking up steam. Of course, there are many shops but most of them are small and offer few products. But now, we start seeing more and more beautiful stores based on western concepts.

Which elements of the Chinese population shop in adult stores like those of your distribution partners?
The older generation has little interest in adult products, which obviously has to do with their upbringing and more conservative values. Younger people, however, are more interested in sexuality than ever; they also use the internet and adult stores as a source of information and inspiration.

Is it true that Chinese consumers are crazy about American and European brands? And if so, does that also go for brands in the adult market?
The problem in China is that nobody believes in local, China-produced products. Instead, people jump at foreign concepts that work and copy them, often paying very little attention to quality. That is why no one wants to buy products ‘Made in China’ here.

“The problem in China is that nobody believes in local, China-produced products.”

Given the large population one would assume that the potential of the Chinese market is nigh endless. You know this market – what is your assessment?
The market is really only just growing up. In the past, sexuality or enjoying sex have been taboo topics for many people. We still see that nowadays when we do training sessions and people look at us with big eyes, simply because they have never heard some of the things we are telling them.

What are the biggest problems on the way to harnessing the full potential of the Chinese market?
The government is making life unnecessarily hard for importers. They want to export their products to other countries, but when it’s foreign companies seeking to sell their products in China, they have them jumping through hoops.

Are there still territories where HOT products are not available?
Yes, South America is still a white spot on the HOT world map. But we definitely intend to change that

Tags:China, Interview
Back to Front Page