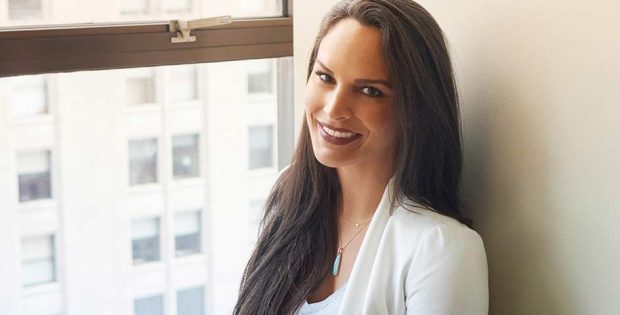 This past January, the Who is Who of the electronics industry presented their latest innovations at the Consumer Electronics Show. However, the innovation that probably caused the greatest stir was the debut product of sex tech company Lora DiCarlo, called Osé. Here is why: Osé won an “Honoree Award for Innovation in Robotics and Drones“ – only to have it revoked shortly afterwards. The media was quick to cover this controversial decision, with the vast majority siding with the sex tech company. As a result, the CES organisers decided to go back on their decision, and the Honoree Award is now back in Lora DiCarlo’s trophy cabinet. But it would be wrong to reduce Osé to this incident, after all, there is a reason this product won the prize in the first place. It offers nifty biomimicry technology that promises blended orgasms to their users. To learn what that means, exactly – and to discuss the potential of modern technology in sex toys – we spoke with Lora Haddock, the founder and CEO of Lora DiCarlo.

Your company Lora DiCarlo is gearing up to release its first product called Osé, the “only product designed for hands-free blended orgasms”. How does Osé achieve this kind of satisfaction?
Lora Haddock: We’re using micro-robotics to mimic the sensations of a human partner (called biomimicry). We worked with the #4 graduate robotics program in the US to develop tech that adapts to your body to stay in place for a hands-free experience while feeling like the fingers, mouth, and tongue of a real partner. The goal is to be able to stimulate the clitoral tissue from both the outside (the glans clitoris and the vulva) and the inside (the G-spot).

Osé doesn’t vibrate at all, instead, the internal portion is designed to mimic the come hither motion of fingers pressing and stroking across the G-spot. The clitoral portion of the product covers the vulva and uses a patent-pending touchless stimulation technology that feels like a human mouth and tongue.

Another of Osé’s features is that it adapts to the body of the user. How does this work in practice?
One of the weaknesses we saw in a lot of the dual stimulators on the market was that they didn’t really stay in place and you have to contort your arms and hands into weird positions to hit just the right spots on your body. So with Osé, we created a patent-pending technology that allows it to both flex and swell to adapt to your body and perfectly align with your G-spot and clitoris, allowing your hands to be free for more adventurous things.

“With Osé, we created a patent-pending technology that allows it to both flex and swell to adapt to your body and perfectly align with your G-spot and clitoris, allowing your hands to be free for more adventurous things.”

What exactly is a “blended orgasm”?
Women’s Health Magazine calls blended orgasms “the Holy Grail of Climaxing”. Basically, a blended orgasm is a combined orgasm that comes from stimulating more than one erogenous zone at the same time. Osé helps elicit a blended clitoral and G-spot orgasm – it’s one of the more powerful orgasms I’ve ever experienced. But until now, it was difficult to achieve a blended orgasm without a skilled partner or some frustrating guesswork with a generic sex toy (or two!).

Before we dive deeper into the technical details, could you tell us a bit about the team, the company, and the philosophy behind Osé?
Our goal with Osé has always been to revolutionise self-pleasure and help people understand their own bodies and pleasure. But at the core our entire company is built around a values-based culture of Respect, Empowerment, and Integrity. The goal is to create a completely inclusive team that puts our social mission on the same level of importance as profit. Our social mission is at its core centred around gender equity in all of its forms.

Those core values and goals have helped us attract an amazingly diverse group of people with a huge spread of industry, technology, and business expertise, which we’re all very proud of. I myself have a decade of healthcare/anatomy expertise from my time in the Navy and medical school. Our director of marketing and sales, Sarah Brown, has over 6 years of experience in luxury women’s wellness and sexual health.

Dr. Ada-Rhodes Short, our senior mechatronics engineer is an expert in cutting-edge robotics and artificial intelligence and our director of engineering, Kim Porter, has over 30 years of experience in product design to high-volume manufacturing. We’re also lucky to have some absolutely amazing advisors with decades of experience in entrepreneurship, business, and the legal field.

How did you come up with the idea for Osé?
When I was 28, I experienced my first blended orgasm – and it literally put me on the floor, it was so good. The only thing that was going through my head at that point was “how do I do that again?” As we’ve said blended orgasms are essentially the holy grail of orgasms and they can be extremely difficult to reach without juggling the perfect combination of toys or a really talented partner – and neither of those are easy to come by. Osé grew out of the desire to make a product that could give all people with vaginas that experience – whether they have a partner or not.

Apart from the inner workings of a sex toy, the design the product also plays an important role. How did you come up with the design for Osé? And what makes it so well-suited for stimulation?
I’ve been in healthcare for over a decade, first as a nurse and then in medical school, but it was my interest in sexual wellness that brought me to sex tech. Osé’s design is based on actual real world data – I collected measurements from around 200 women about the measurements of their vagina, clitoris, and G-spot. I literally just asked every woman I knew if they were willing to help with the project, and once they heard what I was working on they were happy to help!

I’ve always been fascinated with the psychological, physiological, and anatomical aspects of the female orgasm, so when I left med school, I decided I wanted to create something for the perfect orgasm. In past decades most vibrators were made by companies with male CEOs, male engineers, male designers. Our team is predominantly made up of people who identify as women (and a few awesome men), so our products are made by women for people with vaginas.

It’s important that products are made by people who understand the anatomy and how the product is going to be used. The design is based on our own experiences and the feedback from our customers on how they actually experience pleasure.

“Osé’s design is based on actual real world data – I collected measurements from around 200 women about the measurements of their vagina, clitoris, and G-spot.”

You presented Osé at the recent CES Show and even won a “CES Innovation Award”. But then the organisers retracted the award and banned you from the show. Could you describe to our readers what happened?
Basically, Osé won an CES 2019 Honoree award for innovation in Robotics and Drones. The competition was judged by experts in the field who decided that Osé was a true step forward for the miniaturisation of robotics and for biomimicry. We received notification of the award in October 2018 and our engineering team was overjoyed. But about a month later we were informed by the CTA, the organisation that produces CES, that their administrators had decided to revoke the award because they felt that Osé was “immoral, obscene, indecent, [or] profane”.

The CTA did eventually return the award in May 2019, which we’re very happy about. It was a long road, and getting the award rightfully returned validated all the work we and our engineers have done. But our goal was never really about the award itself, instead we’re working to make sure there are real policy changes within the CTA that improve gender equity across the board in both tech and business.

You responded to this incident with an open letter in which you accused the organisers of the show of having double standards when it comes to sexuality. How was the response to this letter?
We had such a strong positive reaction from both everyday people and people in the tech and business spaces specifically. The CES debacle just helped us shine a light on a much more widespread problem – gender-bias and discrimination in technology and business as a whole. Within the first week of our award being revoked we had over 20,000 subscribers to our newsletter, and when we got our award back in May we had another 25,000 over the course of just a few days.

We’ve received over 250 pieces of press coverage in publications from TechCrunch to Cosmo to dozens of podcasts and interviews. This CES/CTA debacle really just showed us that the rest of the world is just as ready as we are to see a change in tech – the sheer outpouring of support we received from all types of people was astounding.

Cis women and men, non-binary, gender non-conforming, LGBTQ+, people of colour, we had so many people writing in to say “we’re ready, let’s do this”. People are ready to see positive change in all of these spaces, and we’re not stopping with just getting our award back.

When will Osé be available to consumers? Are you planning on working together with distributors in Europe as well?
We’ll be officially launching Osé in fall of 2019 on our website, but we are working on an exclusive presale opportunity for all of the customers signed up to our newsletter list. And we’re definitely looking forward to working with retail and distribution partners globally! Anyone interested in connecting should send an email to sales@loradicarlo.com.