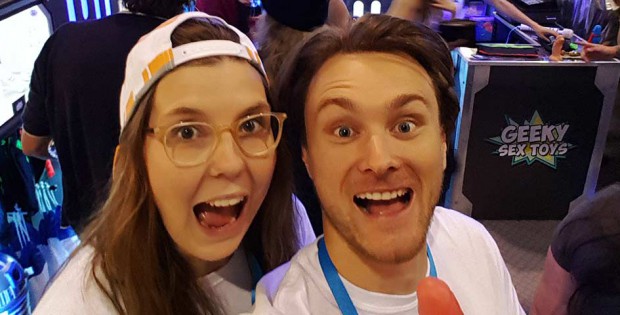 There are lots of adult products inspired by the Fifty Shades films, but there aren’t many other movies that made the transition from silver screen to sex toy drawer. Geeky Sex Toys set out to change this. The Australia-based company already gave many a Hollywood movie the sex toy treatment, and now, they bring us the adult toy version of May’s biggest hit as they introduce their new “Orgasms of the Galaxy” collection. Geeky Sex Toys founder Josh presents these new toys in our EAN interview and also tells us about the history of his young company.

Geeky Sex Toys recently released a new collection called „Orgasms of the Galaxy“ that has some similarities to like a recent Hollywood blockbuster. What made you choose this universe to extend your collection?
Josh: How could we not!? The original movie was hilarious and with such a diverse bunch of characters to choose from, it was definitely high on our priority list.

Is there a toy you are especially fond of in this new collection?
As a male who started a sex toy company with his female partner, I have always felt a little left out when it comes to the testing side of things. Let’s just say I have a particular fondness for Cumora and Stimula after an extensive testing phase…

Do you time your new collections so they are released when a new blockbuster hits the cinemas or do you just make toys of topics you think would be fun to do?
A bit of both I think. As such a small start-up with no outside funding, we need all the help we can get when it comes to advertising/marketing. So, if we time it with the release it means we can get our awesome products into more peoples… ‘hands’. But because we are such big nerds and are usually geeking out over the latest movie, games, TV shows, it kind of just happens like that.

Geeky Sex Toys is based in Australia, but you are shipping worldwide. Do you see different preferences in different regions or do geeks have the same taste no matter where they live?
It’s SO random! We have been trying to pick patterns but I think every niche fandom has their audience spread so far around the world it makes it impossible to target specific locations.

With more and more products and a larger fan base, when will it be time for Geeky Sex Toys to open up your own factory instead of creating your toys by hand?
That’s a tricky question! We are currently a team of two who work day and night to provide the highest quality of products to our customers. I think our aim is to eventually create a new style of manufacturing, something more of a hybrid between the traditional mass produced toys, and the handcrafted artisanal style products.