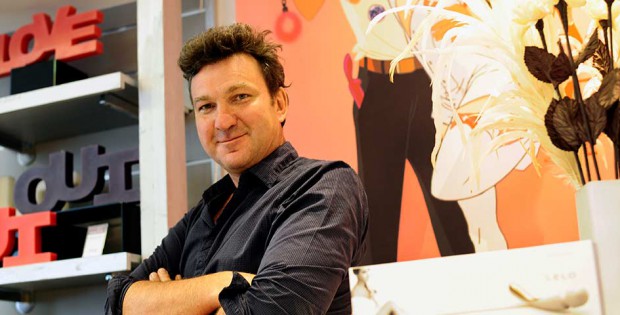 Many consumers are still sceptical when it comes to sex toys, although the acceptance of adult products obviously varies from country to country. In France, the store chain Passage du Désir has set out to do away with old preconceptions and reservations. For their latest one-two punch of funny commercials, they have focussed on binge watching, i.e. watching several episodes of a TV show in one sitting. The humorous message: Excessive consumption of TV shows can be harmful to a relationship. In our EAN interview with Patrick Pruvot, manager of the Passage du Désir store chain, we discuss the potential of creative advertising.

Passage du Désir launched a new ad campaign a few weeks ago. Would you mind telling our readers more about these two new video clips?
Patrick Pruvot: It’s a real eye-opener, as no one has ever shown zombies or super heroes in a commercial that is ultimately about selling sex toys, therefore we thought Passage du Désir had to do it! More seriously, though, our goal at Passage du Désir is to find ways to expand the adult market towards new target groups. Many people still do not feel comfortable with adult products so in order to change their view and make them buy adult products, it is important to talk to them about harmony in a relationship. We briefed our advertising agency in that direction: Do not talk about pleasure (this could make people feel uncomfortable) but explain that our products can help couples keep their relationship fresh in the long run.

So the idea is to show a couple who are not talking anymore…and who would benefit from getting some adult products to break these walls down?
We made two commercials in order to address both, men and women. In the zombie spot, the man is so enraptured in his ‘The Walking Dead’ series that he doesn’t realise his girlfriend is kissing a zombie just next to him on the sofa. In the other commercial, the ‘Super Girl’ one, the girl is watching a TV series without noticing that her man is having an affair with Super Girl just next to her on the bed. At the end of both spots, the voice-over says ‘Don’t let TV series steal your life with your beloved one from you, react – with Passage du Désir!’

Where could/can these videos be watched, and what has the feedback been like so far?
You can watch these ads when downloading TV series on the internet. For example, while you were downloading Super Girl on Netflix, you could watch this warning showing you not to forget your partner while watching your TV series! Same with the zombie clip, which was played when people downloaded a zombie series. We were nominated at Cannes for the advertising awards!

The effectiveness of ad campaigns is often hard to judge, but would you say that you got more customers in your store and your online shop since the start of the ad campaign?
Honestly, such a communication does not have a direct impact on your sales but is a part of brand-building and setting your brand apart from others.

When and how did the idea for these commercials come about?
Service Plan, our advertising agency, came to us six months ago with this simple idea: Modern couples spend more time watching TV series than making love. This has to change, and it will, thanks to Passage du Désir!

Why did you decide to make the videos about TV shows and binge watching?
We liked the idea as it didn’t revolve around the typical clichés … and also because these commercials are just fun to watch… And Part of Passage du Désir marketing approach is that, when you make people smile or laugh, they won’t feel ashamed anymore.

Was this idea quickly realised or did you encounter problems during the development and production of your videos?
Well, there are a lot of design and sound effects in these two commercials… and of course, you cannot produce them in a cheap way, otherwise they would look and sound ridiculous. So that was a challenge, to do it with a reasonable budget.

Passage du Désir has always tried to make people understand that sex toys can enhance our intimate experiences and relationships, and your new ad campaign also conveys that message. But haven’t things changed in that regard? Is there still so little acceptance of sex toys in today’s society?
We are constantly battling people’s guilt and shame to convince them to buy a sex toy (or an adult product in general). But, well, I am just talking about the French market as it is our core market.

Do you already have new ideas up your sleeve to create more awareness for sex toys and their positive effects? What are your plans for the future?
Of course! We have many projects online and offline. For the moment, I will keep them a secret, but rest assured, we will keep you posted!

Tags:Marketing, Retail
Back to Front Page