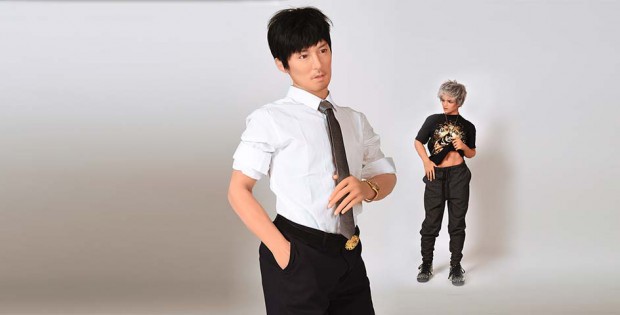 They are already a big success in China, and now Leo and Herman – the two versions of the new male silicone doll from DS Dolls – have set their sights on the European market. To learn more about these two, EAN spoke with Paul Lumb, the owner of the Cloud Climax online shop and reseller of DS Dolls in Great Britain and several other European countries. In our interview, Paul does away with the preconception that silicone dolls are only for men. And since we learned in our last interview that female dolls are often referred to as ‘Dutch Wives’, we obviously wanted to know if there is a similar moniker for male dolls.

You have added a male doll from DS Dolls to the Cloud Climax range, which raises the question: Why didn’t you carry male silicone dolls before?
Paul Lumb: The male dolls are a new addition the DS Dolls range. Already known for their high-quality Platinum Silicone Sex Dolls and with demand growing for a male counterpart, it was only a matter of time before a male range was introduced.

Are the characteristics and qualities of these DS Dolls comparable to the female Platinum Silicone dolls?
Exactly right, yes, they are. Apart from the obvious anatomical differences they are in essence the same. The same materials and manufacturing processes are used to make the male dolls. The skeleton is the same and they also use platinum silicone to give the high-quality skin-like look and feel, the same as the ladies.

And the price is also in the same vicinity as the female luxury dolls?
The retail price from Cloud Climax is £3795 plus the phallus attachments which start at £30. Our best-selling 167cm female doll is the same price; she is the top of the range doll.

How many different models or variations are there?
There are two styles of face currently released by DS Dolls. There is Leo who has a European looking face and there is Herman who has an Asian look. The body is one type which is quite muscular and there are two type of Penis attachment. One is flaccid and one can be both flaccid or erect. It can be manipulated between the two states easily.

The products have already hit the market in China. What’s the response been like so far?
The product has so far been a great success in China and now opening the product up to the rest of the world means that the success already experienced can expand. There are still few high-quality manufacturers who make a male doll range, especially in silicone. To overlook the market for male dolls would be idiotic as it is getting more and more acceptable to own any type of sexual device including a doll, which is really one of the ultimate toys you can own.

“To overlook the market for male dolls would be idiotic as it is getting more and more acceptable to own any type of sexual device including a doll, which is really one of the ultimate toys you can own.”

Is there a lot of demand for such dolls or are we talking about a niche within a niche here?
The demand for these dolls is getting bigger and bigger as it is becoming more acceptable to own and easier to buy a sex doll. It has until now been predominantly female dolls that have been available, which is going to be something that does begin change. A lot of our customers do not see the doll as a sex doll, it is more of a fascination for the human body that stimulates their order.

Do you believe that women buy such dolls for the same reasons as men?
There are many buyers of sex dolls and for many reasons, and this applies to both male and female dolls. Some see the doll as their companion or their friend, some have a doll due to having a higher sex drive than their partner, others use them as photography models and don’t have sex with them at all. We do find that our male doll buyers are not only women. We also do have couples who buy a doll to enhance their relationship without the emotional side of introducing another person into the relationship or who buy each other a doll.

Buying a sex doll can allow a person to explore their sexuality and to find out what they enjoy and what they don’t without another person looking on. It can allow some fantasies to be lived that may be unobtainable in the real world.

“Buying a sex doll can allow a person to explore their sexuality and to find out what they enjoy and what they don’t without another person looking on.”

It would be a mistake to reduce female dolls to mere sex objects, but it is obvious that many men buy these products for sexual purposes. Are female buyers different in that regard?
It is well known that these dolls are used for sex and sexual relationships, but not they are not solely seen in this regard by our customers. In this day in age where all people are much busier with work and life, may have time constraints or other difficulties in forming a relationship with a person, a life-size doll of whatever gender can be a viable option. It can be someone craving a connection, or having lost a partner does not want to be alone whether physically or sexually. Perhaps somebody who doesn’t have the self-confidence to find somebody. These are not gender specific problems.

As we learned in our last interview, female dolls are called ‘Dutch Wives’. Is there also a nickname for male dolls?
Well, they are sometimes called Manikins, but I have no idea where this originated. Another interesting piece of doll trivia is that doll enthusiasts are sometime called i-doll-ators or i-doll-isers.

In the media, there’s currently a lot of talk about robots and, more specifically, sex with robots – which could be the next evolutionary step up from lifelike dolls. Some people even call for a ban on the development of such products. What is your stance on this whole subject?
There is a lot of talk and two sides to the argument about sex robots. I think that the main point to remember is that a human is a human and a robot is a robot. DS Dolls are currently working on a robotic face and head that will have expressions and be able to move. In my opinion a move forward like this beginning with the face just brings that extra level of reality to a doll that is already so lifelike anyway.

I believe that a ban on development would be difficult to impose and would put a halt to a lot of robotic development for other reasons.
I have to say that I would much rather have a person buy a robot and mould and shape that robot into the personality that they want them to be rather than to do that another human being, which I am sure most people would have a problem with.

I think that there will initially be a difference in what technology is available compared to what people are willing to deem as acceptable but this will catch up with itself to just become normal. This has been the same with any kind of new sex toy… at first it was really out there but then it gets to the point where everyone has tried one and now owns two. People in general are now a lot more liberal than ever before and this will continue to develop along with new technologies such as sex robots.