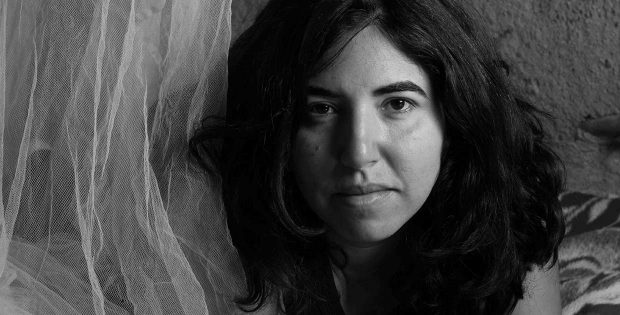 The annual Berlinale film festival is not only a showcase for big movies and established directors, but also a way for up-and-coming filmmakers to show their works to a larger audience. At this year’s festival, Reem Morsi had the opportunity to present a teaser of her upcoming film Bootleg. The scene that was shown at Berlinale included a woman trying to smuggle sex toys through an airport checkpoint. In our interview, the filmmaker tells us how that scene fits into the greater whole of her movie, and we also talk about the current situation regarding sex toys in Egypt and the Middle East.

Reem, before we talk about your latest film project, would you mind telling us a bit about your background and what brought you to filmmaking?
Reem Morsi: I have been writing stories since I was 5 or 6 years old. I would write a story point then illustrate it (now known as storyboarding), but I had no idea that I was planning scenes for the story I am writing. Also, my father was a film buff and we used to watch movies together when I was a child and we would critique the films together, from Charlie Chaplin films to Doctor Zhivago. I couldn’t become a filmmaker earlier in my career as it was always too expensive, or too inaccessible, so I worked as a professional scuba diver, then did an MA/LLM degree in international law and started working in human rights for around ten years, after which I got a scholarship from the British government to do an MA in filmmaking at the London Film School, and everything in my life changed. I was finally living my dream. I wanted to bring stories I saw in human rights to the light in a very entertaining way, so this is where Bootleg came from.

Your latest project, named Bootleg, is about a Muslim woman who starts an underground sex toy business in Egypt. Could you tell us more about the plot and why you chose this topic?
This project was a reaction to the rumoured virginity tests that supposedly took place during the Egyptian revolution, but also a reaction to my previous work in human rights and working on fighting female genital mutilation (FGM) and the terrible impact it has on young girls and women. I realised that FGM has been portrayed as an Islamic requirement but in reality, it is an African tradition that was falsely portrayed as an Islamic rule. So Bootleg, even though it’s a dramatic satirical comedy, is still about the issue of FGM but also the issue of sexual pleasure and equality in sexual rights between genders. The story has evolved after I participated at the Berlin Script Station at Berlinale Talents. It is now about three different Egyptian women, each with different social and economic backgrounds and different opinions on sex and sexual pleasure. They all unite in starting the manufacturing of sex toys in Egypt in the funniest ways possible, from trying to create some from bathtub toys to finally mastering the art and being chased by the police. The most famous scene has been filmed as a trailer, and it is basically one of the three women trying to smuggle the toys under her clothes into Egypt and being afraid of being arrested for owning sex toys.

Big parts of population in Europe and the US are becoming more open-minded about using sex toys and expressing their sexuality. How would you describe the situation in Egypt and the Arab world in general in this regard?
I don’t think the situation in Egypt and the Arab world is opening up, unless it’s very underground and hush hush. There have been rumours that there are some toys brought into the countries and sold privately under the radar. The situation is still quite conservative. However, there is a big market for sexy lingerie sold openly as it’s expected to be sold to married couples and its usually for the men’s pleasure. There are also some stores that sell sensual oils and other items that are basically not sex toys, but they are for prepping the mood – so, no sex toys that I know of, but I hope I am wrong. Whenever I’ve tried to make surveys about the issue, getting people to talk about sexual pleasure, even anonymously, there was a lot of resistance and many were offended that I even asked. However, some people create their own toys or use other non-sex toy items to pleasure themselves.

Social habits and personal decisions are one thing, but government restrictions and laws are something entirely different. Are sex toys actually illegal in Egypt and other countries in this region? How strict are the laws concerning such products enforced, and how strictly are they enforced?
When I was doing research for the film, I did months of research about sex toy shops in Egypt, and I came across a small shop that sells lingerie and secretly sells some sex toys out of the box in small plastic bags, and the owner hesitated a lot before showing me the toys as he was afraid I might represent the government and that he might get arrested. I assured him I wasn’t from the police or government. I would imagine that the sale, purchasing, and manufacturing of sex toys in Egypt and most Arab countries is against the law and could be grounds for arrest under lewd behaviour. I even read an article a few years ago that the ministries of Interior and health have launched a campaign to arrest some prosthetics-manufacturing workshops for also manufacturing wooden dildos.

“I would imagine that the sale, purchasing, and manufacturing of sex toys in Egypt and most Arab countries is against the law and could be grounds for arrest under lewd behaviour.”

During the Arab Spring revolution in 2011, there was also hope that the situation for women and sexual freedom in general would improve. How did the situation actually develop and what is left of this hope?
As you saw in my answer to question two, it was the inspiration for the film. I don’t think the situation improved and since I haven’t lived in Egypt in the last two years, I am not completely sure where it is, but going by what I hear from my friends in Egypt, it has not gotten better. However, I want to clarify that the way Egyptian society is portrayed in Western media shows women’s rights in a much worse light than they actually are. The situation is very complex, but yes, it still hasn’t gotten drastically better as a result of the revolution. I feel it is at a standstill.

You recently showed a trailer for your latest movie at the Berlinale Film Festival in Berlin. How did the audience respond?
It was an incredible experience. Many audience members, from so many backgrounds, including Arabic/Muslim backgrounds, approached me after and told me how much they enjoyed the trailer and how meaningful the trailer was to them and how it impacted their stereotypical views of the region and how eager they are to watch the film when its released. I was happy to also be approached by audience members from the Middle East who also loved the trailer. With the kind of overwhelming reaction the trailer received, I believe that this film will be quite popular around the world upon release. So, since we have a few scenes in sex toys shops in a western country, we are open to product placement if anyone is interested in approaching us as we are currently in the stage of financing the film for a shoot in 2019.

When and where will the movie come to the cinemas?
We are planning to shoot Bootleg in 2019 and hopefully start its festival tour then, followed by a release in cinemas & online platforms. We strongly feel that this film will be quite anticipated in many western countries, but we are also hoping for a Middle Eastern release as it might lead to an open discussion about sex toys and hopefully opening the path for a different perspective on women’s sexual rights.