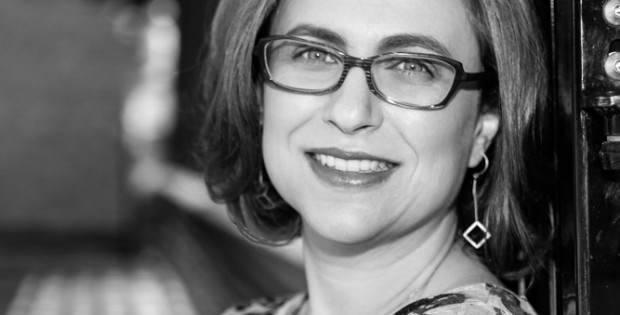 It’s probably common knowledge for the members of the industry, but outsiders may still be surprised that modern sex toys offer top-notch quality. Be it design or functionality, these pleasure devices definitely bear comparison with products from any industry. That’s also what Rita Orrell found when she took a closer look at sex toys for her project designythings.com – a blog on product design. She was so impressed that she decided to dedicate a book to the world of modern sex toys, the recently published “Objects of Desire” which puts a spotlight on some of the most beautifully designed adult products, selected by Rita and designer Jason Scuderi. In our interview, Rita explains her reasons for creating the book, the process of making it, and she tells us which products she found particularly appealing. Scuderi also joins in to share his thoughts on the design of the book itself.

Why did you write a book about the design of sex toys?
Rita Orrell: A couple of years ago while researching new products for my design blog designythings.com, I kept coming across award-winning sex toys and other beautifully designed erotic objects. I would share these links on social media and I could see there was great interest in the subject. Then I discovered that a mainstream industrial designer named Yves Béhar had designed a line of vibrators for a San Francisco based company called Jimmyjane. I thought that if a major designer was tackling this product type, there must be something big happening in the industry, and there was. I started collecting interesting designs and invited my friend Jason Scuderi to design the book. A year later we found our agent and then six months after that our publisher, and the result is Objects of Desire. 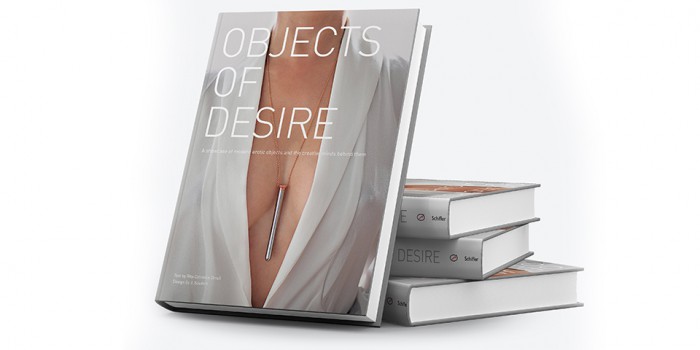 Which expectations did you have when you started writing Objects of Desire? Did the book turn out the way you thought it would?
Rita Orrell: Since I was collaborating on the book with an incredible designer, we had a very clear vision for it from the start. We wanted it to be clean, modern, and sexy, like the subject. We are very pleased with the final result. The publisher and printer did a fantastic job and the book is everything we had hoped it would be.

Is this the first book ever to deal with the design of sex toys in this way? Is there a predecessors to “Objects of Desire” in this regard?
Rita Orrell: It’s not the first book to tackle the subject in general, but it might be the only book currently in print in English focused solely on functional erotic objects from a design perspective. Other titles are instructional in nature, and geared towards helping singles or couples introduce toys into their lives. Erika Moen, the cartoonist behind the Oh Joy Sex Toy website, has recently published two volumes of her work which includes cartoon reviews of different toys. She’s very talented. 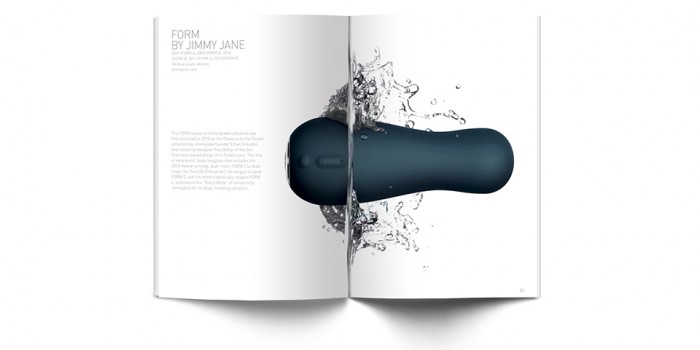 When creating a book about design, the presentation of the products is an important aspect. Jason Scuderi, being a designer, could you tell us a bit about the approach you took towards the design of Objects of Desire?
Jason Scuderi: When we first began discussing the project, I think both of us were a little taken back by the subject matter. Rita comes from an architectural background and I focused mainly on sports fashion and music. We did however have a common thread between us via product design. Rita was well versed in writing about consumer and business products and with my background in product advertising, the project suddenly felt just like any other we’ve tackled.

After experimenting extensively with the layout, it was apparent to both of us that the design execution needed to be utilitarian with a sophisticated high-level aesthetic. Copy was written in short concise bursts packed with vital information and Rita’s trademark fluidity. The font used throughout the book was DIN. It’s a wonderful sans-serif that’s not only easy to read in various weights, but can be very elegant if executed properly. The sharpness and curvatures of the letters paired well with the products.

Some of the products are technologically advanced machines, while others are simply just beautiful forms. Because we were focusing mainly on the industrial design aspect and not dipping too deeply into social innuendo, they were showcased as if they were part of a museum catalog. When you visit a museum, there may be a multitude of artist’s work that may or may not mesh together. The white walls or in this case, pages, allow for an unobtrusive and otherwise neutral plain for the products to shine.

In respect to the various visuals provided by the manufacturers and individual designers, we knew that the idea of simplicity may have turned out to be a daunting task because you never know what you might receive. Through tedious curation, we attempted to choose products and visuals that not only fit the aesthetic texture we wanted to achieve, but highlighted the products in an unfettered light. As previously mentioned, many sit on a stark white or dark background so the viewer isn’t distracted by peripheral minutia. Most of the products in the collection, speak for themselves. There wasn’t a great deal of graphic dramatisation. We felt that the fundamental essence of the collection was dramatic enough. The last image we chose was the cover. Out of the massive bulk of material, the Vesper image by Crave was a pure standout. It’s a stunning shot that visually sums up the story we wanted to tell.

Rita, how did you choose which products to present in Objects of Desire?
Rita Orrell: The products had to be both beautiful (to us at least!) and functional. So we did not select art, sculpture, paintings, etc. that are not meant to be touched and used. The manufacturers/designers we selected had to disclose the material content of the products, and provide high-quality photography of the products. Jason and I would discuss and review each product, and sometimes we didn’t agree. The photos also needed to be up to our standards. Almost all of the photography was provided to us by the manufacturers or designers, and Jason applied his design magic to bring them together into a cohesive collection. 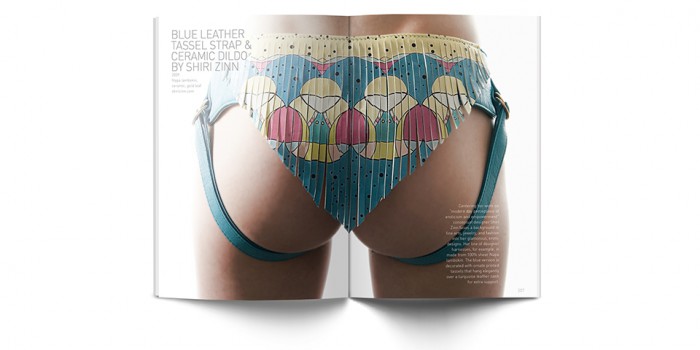 Were you able to discern a guideline or some basic rules about what makes a good sex toy?
Rita Orrell: Generally, good sex toys are designed with anatomy in mind. That might seem obvious, but there are still many novelty products on the market that are cheap, toxic, and frankly, silly. I respect companies like Tantus, Aneros, Tenga, and others who actually study the human body to determine what feels best for the majority of the population. Good sex toys are also easy to clean, made of body-safe materials, and offer some kind of warranty.

The design of sex toys has changed a lot over the last decade and what we see today is very different from the dong-coloured, phallus-shaped products of the past. What do you think triggered this change?
Rita Orrell: This shift is part of the overall revolution in design that has occurred in the industry – and the reason why I wanted to write the book. The introduction of silicone into the sex toy industry has been a big factor as has more women becoming involved in the design process. I think the fact that the sex industry is one of the first adopters of new technologies helps. Almost as soon as the Apple Watch launched, a manufacturer we feature in the book made sure their remote toy was compatible! The amount of well-lit, friendly shops around the world is also a factor. Folks expect a certain level of quality now when they go into a sex shop, and that drives companies to invest more in design. 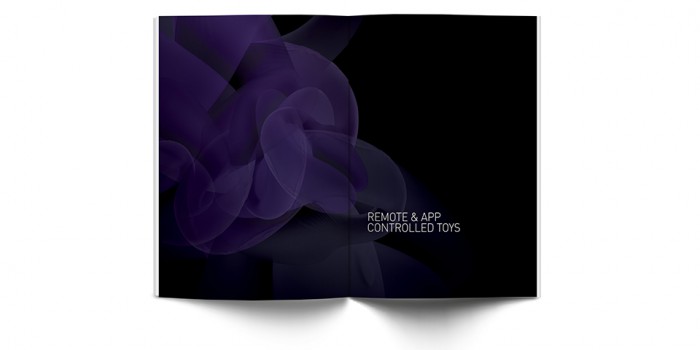 Will good design be the way to bring sex toys into the mainstream and make them an everyday object?
Rita Orrell: I hope so. They are firmly a part of pop culture now. I see references to sex toys on television quite frequently (Fleshlight often comes up) and I think movies and books like Fifty Shades of Grey have made the topic something open for discussion. The stigma still does exist in many circles, but it’s getting better. I hope our book encourages consumers and designers to look at these products in a new light. 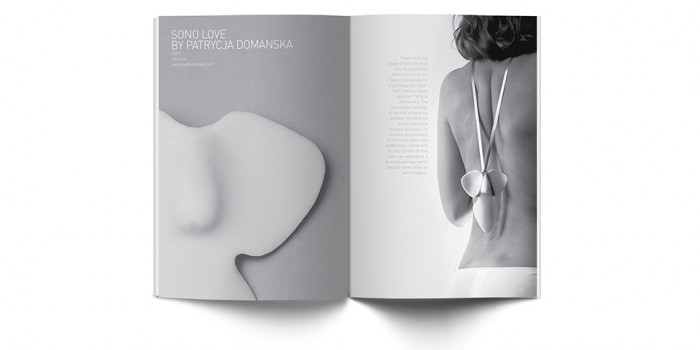