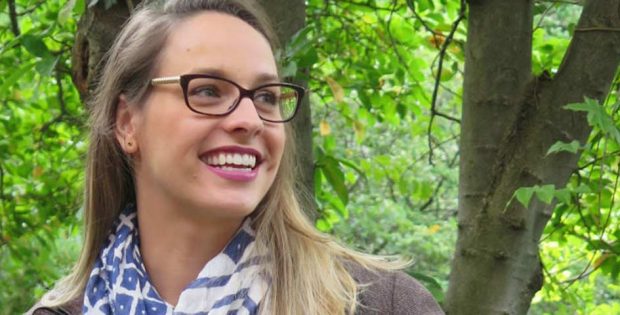 What will the future of human sexuality look like? What role will technology play in the evolution of society? Online magazine FutureofSex.net has been looking into potential answers to these questions since 2011, keeping the readers informed about the latest developments in the realm of remote sex, virtual reality, robots, and sex tech. But the online portal also covers evolving trends in fields such as pharmaceuticals and dating behaviour. EAN interviewed editor-in-chief Jenna Owsianik to learn more about FutureofSex.net and the developments that will shape our view of sexuality.

Jenna, as editor-in-chief of the online magazine futureofsex.net, you write about how sexuality changes through technological and social developments. Can you briefly present your work on these topics?
Jenna Owsianik: Yes, thank you for the opportunity to speak about my work. At FutureofSex.net we report on the major fields driving innovation in intimacy: robotics, virtual sex. remote sex (teledildonics), immersive entertainment, and human augmentation.

However, we’re not just interested in how new technologies are changing human sexuality. We’re also fascinated by what the creation and use of new sex tech says about us.

Our goal is to cover both advancements and ethics, all in a way that is sex-positive and hopefully sparks discussion on how we can create a future of sex that is both inclusive and free of shame.

Before we go any further into the website and the topics covered therein, could you tell us a little bit about yourself? How did you come to write about sex and sex tech?
People are sometimes surprised about my background since I majored in women’s studies and feminist research. From there I studied journalism and even worked as a researcher on a show about the history of human sexuality at one point.

Writing about sex and sex tech has really been a natural progression for me. I’m fascinated by how gender and sexuality influence our daily lives—inside and outside of the bedroom.

Sex and technology can provide wonderful outlets for self-expression, healing, and connection. On the other hand, when resources and knowledge are withheld, they can be used to oppress and harm. These topics are too important to ignore together.

Who is the website FutureofSex.net aimed at? Can you tell us a bit about your readership?
Everyone! To be more specific, we’re not trying to target a specific group per se, because we aim to cover diverse viewpoints and grow a community.

And to that end I’d say our readership includes a broad range of folks. While we do attract more general readers who are curious about new sexual technologies, we also have a following from people in the sex tech industry.

We have a fairly balanced gender ratio. Geographically most of our readers are from the United States and the United Kingdom.

Which (technical) development has had the biggest influence on sex since the foundation of the website futureofsex.net?
That’s a tough question to answer since “sex” is not perceived or experienced as just one thing to everyone. That being said, the site launched in 2011 and since the rise of dating and remote sex apps have changed how people meet and become intimate.

Remember the days when people who tried online dating were thought of as odd or risk-takers? Now not only is it common to meet someone new using your smartphone, any time you want to pull it out, people are also using smartphones to have long-distance sex with app-connected sex toys.

Seeing one’s likeness shared on the Internet can cause legitimate trauma, according to experts, and is not unlike what is experienced after sexual assault.

The disability market is often is overlooked, which means there is a lot of opportunity for investors and developers who move into this space. In the US, one in five people has a disability. Worldwide, more than a billion people have a disability and they control more than $6 trillion a year. Specifically, in the UK, the disposable income of people with disabilities and their families is referred to as “the purple pound” and makes up £249 billion of yearly spending in the region. The global population is also aging, which means disabilities will also increase and products that focus on accessible design will be in higher demand.

Another topic that keeps popping up in the media is sex robots. What are the chances of us seeing such robots in the coming years? What is the current status of this segment?
The highly sophisticated and incredibly realistic humanoid sex robots portrayed in film seem lightyears away when compared to what’s actually been developed and on the market.

Right now, we mainly see animatronic sex dolls equipped with low-level artificial intelligence and other functions to give them a sense of realism. For example, some have contracting orifices, warming body parts, sensors, Siri-like speaking abilities, and can make various facial expressions.

Specifically, the Realbotix project from Abyss Creations as well as DS Doll have constructed highly realistic animatronic love dolls and robots. Developers have also been incorporating AI, augmented reality, and interactive sex toys into their prototypes to make them feel and act more like lifelike companions.

“The highly sophisticated and incredibly realistic humanoid sex robots portrayed in film seem lightyears away when compared to what’s actually been developed and on the market. “

Not every development is necessarily positive … where do you see the biggest risks in sex tech?
I don’t see any sex tech development or product in itself as being a risk. I see a risk in people disconnecting from themselves and relying on technology alone to bring themselves happiness or pleasure.

Let’s finish by going a little crazy: How will sexuality have changed a hundred years from now?
There will be a converging of the major technological fields that will result in incredibly realistic yet simulated sexual environments and experiences.

Not all experiences will be with non-human avatars or robots, however. Paired with ultra-fast data transmission rates, virtual reality, sexual robotics, and haptic technology will act as surrogates, exchanging touch and other sensation between lovers over the Internet.

What are your plans for the further development of FutureofSex.net?
We’ve recently launched the Future of Sex Community, an online hub at futureofsex.net/community where members can submit posts on what sex and relationships will be like in the future.

Sex for Every Body is an online publication that celebrates sexual and body diversity.

Our goal is to make sex education resources easier to access and more inclusive, particularly to people living with disabilities and those healing from sexual trauma.