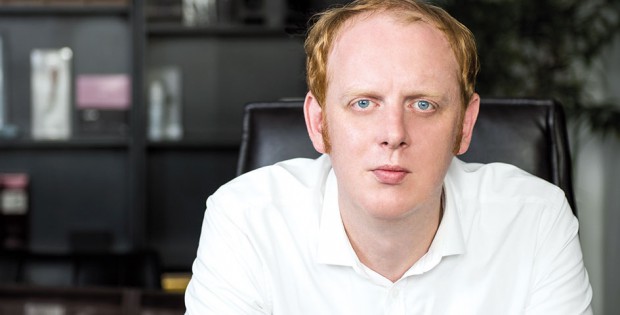 At the beginning of the year, PicoBong – an offshoot of the luxury brand Lelo – launched an improved version of their Power Up collection. Last month, the brand followed that up with the new Remoji toys. Remoji had emerged successful from a campaign on crowdfunding platform Indiegogo, reaching PicoBong’s financial goal within a short period of time. As the name implies, the Remoji collection marks the brand’s first foray into the realm of app-controlled toys. In our EAN interview, Steve Thomson, the CMO of PicoBong, shares more information about these new products, and he also tells us about the latest developments in the Lelo brand.

PicoBong recently extended its portfolio with updated versions of the Tano, Ipo, Kiki, Mahana, and Honi massagers. How are the new versions different from what was on the market before?
Steve Thomson: As the name suggest, the POWER UP Series is an update on PicoBong’s very first products that doubles their vibration strength while maintaining their simple designs and affordable pricing.

We’re also very excited to have launched a new line as part of an Indiegogo campaign: a control app that is more than just some boring lines, but rather something that’s actually fun (that doubled its goal in the first day)!

Named the REMOJI Series, it will use a mobile app (designed with backer input) to control four brand new rechargeable toys – the DIVER Egg Vibe, SURFER Plug Vibe, LIFEGUARD Ring Vibe, and BLOWHOLE M-Cup. The idea behind REMOJI was to create a remote to use by incorporating a colourful, game-like interface.

How would you describe the target audience for PicoBong products in general? And what should a designer keep in mind when creating products for this target group?
Our PicoBong fans are an exciting group because, as they’re mostly still in their late teens and early twenties, they’re still exploring and developing their sexual selves, but are well-informed and sex-savvy enough to know how to look for quality in their products.

They tend to think of themselves as fitting less rigidly into boxes or labels, so products don’t necessarily need to be made with a rigid idea of how or with whom they’ll be used. The Transformer was an excellent example of this because it leaves everything up to the imagination of the user.

Brands become more and more important, not only in the erotic market. How well known is Pico Bong to the public and how pleased are you with the brand awareness of PicoBong, especially in comparison with LELO?
PicoBong has had an explosive year in terms of our growing appeal. Our launch last year of Transformer saw over 100 articles written about it and over 100,000 organic views of its YouTube video. Since then, we’ve been setting our sights on even more mainstream recognition. We worked with renowned adult actress Veronica Vain to produce a film during the summer, and have continued supporting events surrounding safe sex and sexuality at college campuses.

The recent success of REMOJI on Indiegogo was really a testament to the growing strength of our brand, which really provides a lot of exciting opportunities to us for the future.

How exactly will the REMOJI app be different from other app-controlled toys that are on the market already?
Many of the existing apps that serve as sex toy remotes use a quite basic design―lines or quadrants― to connect long distance couples, and quite frankly, they aren’t very interesting to use. With REMOJI, we wanted to create an app that was (nearly) as fun to use as the actual toys it controls.

REMOJI is bright, colourful, and is almost designed more like a game―thus making it a lot more discreet if you want to use it in public while out with your partner.

Which measures do you take to establish the PicoBong as an option for a consumer’s next or maybe first sex toy?
We get involved with a lot of events and initiatives around the world to engage with our audiences, particularly at universities and within the LGBTQ community. While it keeps us in their minds when they’re looking for a new toy, it also helps us stay connected with our fans and better understand what they are looking for in their sex toys and from their sex toy brands. Many in the university-age group are looking to support companies that are willing to get involved with the community and have a developed identity.

Facebook, Twitter, Instagram, your own blog – PicoBong uses many methods to reach out to the customers directly. How important are such measures for your brand and how can retailers, who offer your products, also profit from your efforts?
Social media presence is invaluable to our brand as it lets us talk to our audience about such a wide variety of things related to their interests. Very few people are always buying new sex toys, but they are spending at least part of every day on Facebook, Twitter, or Instagram.

Engaging with customers through social media, especially those who might be new to sex toys, is a great way to normalise the idea of owning vibrators and encourage healthy discussions on sex generally. With multifaceted content, you can really acquaint them with the idea of their solo sex life playing a larger role in both their partnered play and as part of their more complete sexual identity, and furthermore, the idea that it isn’t anything to be ashamed of.

The larger benefit for retailers is exposure; when fans aren’t afraid of talking about sex toys, and indeed seek out content surrounding them, it means that there can be larger buzz around new products on a scale not seen with adult products before.

Would you say that PicoBong has played an important role in creating awareness and acceptance for sex toys in our society?
I think we’ve seen a lot of success when it comes to breaking down certain misconceptions about sex toys that younger people may have. Sex toys don’t need to be something used just by women, or single people, for example. Sex toys are normal and fun whether used alone or with a partner, and sharing them with someone else is definitely not just for married couples who’ve become bored or need to spice things up.

We are big believers in the marriage of technology and sex toy. For example, REMOJI was something we conceived upon finding out that the average person now spends 23 days a year on their phone. We realised that we needed to find a way to make your phone something that augments sexual experiences, rather than distracts from them.

PicoBong not only offers an assortment of vibes but also has an accessories range. How do these products fit into your concept? Will we see other product ranges in the future?
As a brand, we present ourselves as a resource for exploring one’s sexuality, and our accessories range is our way of letting explore their kinkier curiosities with comfortable and affordable BDSM gear, while also presenting the idea that kink doesn’t need to mean black leather and rubber ball gags; it can take whatever shape you want it to.
Our experience on Indiegogo so far has given us overwhelming fan interaction, and we look forward to continuing the conversation with them to create the products that they really want to have in their bedrooms.

One of the trends we’ve seen in recent times are app- controlled toys. Was that the reason for Pico Bong to start developing such toys yourself?
We’re very excited to have launched our first app-controlled line on Indiegogo! REMOJI is our conception of an app that does so much more than use lines and quadrants to control your toys; it’s interactive and uses music-inspired rhythms and animations to actually add more fun to your experience, rather than being a boring remote that just happens to be on your phone.

We launched this app on Indiegogo specifically because we wanted to prove that there was demand for this type of app and get genuine consumer input, and we were blown away by the response―we nearly doubled our funding goal of $10, 000 within the first 24 hours and support is still growing!

Do you think that the market in general is too focused on high-end toys, especially in terms of new developments, and that it tends to overlook the first-time buyers?
Sex toys are an investment, especially the high-end brands, and it’s important to understand your desires as well as what types of products work for your body before investing. PicoBong is perfect for this because it offers high quality products at a lower price point while they’re still exploring different sensations.

We also invest heavily in educating the new buyers; that’s part of the reason why we collaborate so heavily with universities―to not only present the brand, but to educate young people on how sex toys can be a very important part of their sex lives.

Does PicoBong offer POS materials for online and offline retailers? Where can interested retailers turn to if they want to promote Pico Bong in their stores?
We have a wide range of POS materials for in store use, and we’re constantly updating our online POS for new products and seasonal campaigns like Valentine’s and Pride. We have a very distinct style and sense of humour that many retailers find very successful at engaging customers, so we encourage people to check our Retailer System or contact their PicoBong sales rep at sales@lelo.com if interested editable banners or in-store materials.

LELO recently announced the development of a new type of condom named HEX. Why does a sex toy manufacturer like LELO decide to expand into the condom market?
STI transmission is on the rise at unprecedented rates, and we have done our own research into exactly why so many people are choosing to forego condoms, showing that many of the reasons boiled down to a perceived decrease in pleasure. This tells us that it’s not the availability of condoms that’s the problem, it’s the appeal. And that’s what HEX will address.

As a pleasure brand, we obviously felt that we had to lend our talents as creators of award-winning pleasure objects to this goal―particularly after seeing how little innovation there really has been in condom design over the past 70 years.