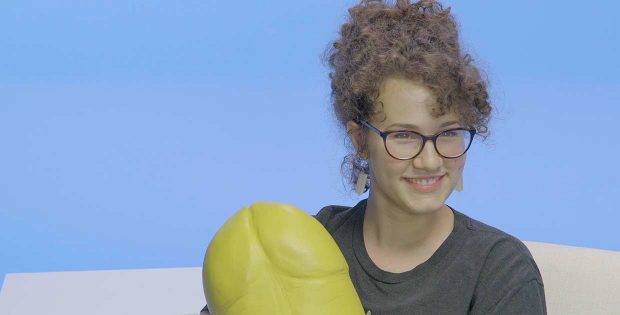 In the summer of 2016, the campus of the University of Texas in Austin was the stage for a very unusual show of protest: Students held sex toys over their heads or tied them to their backpacks. This way, they wanted to demonstrate their dislike of a new law that had been passed in the Lone Star State allowing people to bear concealed handguns in the lecture halls of the university (while the public display of sex toys was forbidden.) This protest, dubbed “Cocks not Glocks” has now become the subject of a documentary film, directed by Audra Webbe. We had the opportunity to interview the filmmaker and ask her about the protest and the reactions it caused.

“Cocks not Glocks: A Documentary“ is a movie about a protest movement that started in response to a law that was passed in Texas in 2016. Could you tell our European readers a bit more about the background? What was the protest against?
Audra Webbe: The Cocks Not Glocks protest was in reaction to the passage of the Campus Carry bill, which allows for concealed handguns to be carried into public university buildings in the state of Texas. Concealed handguns were already allowed on university grounds, but now they would be allowed into lecture halls, professor’s offices with permission, and certain dorm areas.

How did the protest play out? Could you give us a short account of what happened that summer 2016 at the University of Texas?
On August 24th 2016, at noon, on the University of Texas West Mall, Jessica and her team strapped dildos on to the backpacks of students, while explaining the current campus carry laws and registering students to vote. While the area swarmed with about 200-300 students at any time, the professors’ group, UT Gun Free, also rallied and gave testimonies against campus carry. Around 2pm, Roy Wood Jr. from the Daily Show came and filmed a segment for the show. Ultimately, the protest was pulled off without a hitch.

The “Cocks not Glocks” protest was almost two years ago. Did anything change at all? How would you describe the outcome of the protest?
As far as the legislature goes, the bill hasn’t changed or been repealed. The Cocks Not Glocks protest lives on in fond memory at UT, and has been a form of protest adopted by a few other campuses around the U.S. However, I would say that in light of the 2016 presidential election that would take place only two months after, the Cocks Not Glocks protest becomes more profound in retrospect. Since Trump becoming president, we’ve seen a slew of protests and demonstrations, including most recently the March for Our Lives and the #MeToo movement. In some ways, I feel that the Cocks Not Glocks protest was a prelude to our country’s surge activism in the Trump era and now, as a documentary, will act as another way of accessing the present social unrest we face.

Have you personally been involved in the protest?
Due to my proximity to the subjects- who were the core organizers of the protest- I ended up being intensely involved in the protest. However, I believe my role in the demonstration wasn’t so much as another organizer, but as someone to bare witness and document it as a moment in history. In efforts to remain ethically unbiased, I tried my best to only document and not facilitate the protest. However, in solidarity with my subjects and with the efforts that they had put in, I strapped a small, purple dildo to my backpack the day of the protest.

How was the feedback in regards to the protest and how was it perceived by the public?
Due to the polarizing nature of the protest, the feedback that it received was a mixture of extremes. There was the far left, that ate up the protest as a testament to feminism and gun control, and then the far right, that felt it was an infringement upon the Second Amendment and an immature way to protest. The ugliest of both sides simply exhibited sexism and misogyny at the sight of young women openly holding dildos. By the time the protest occurred and was featured on local news, as well as The New York Times, Rolling Stone, and Vice, it was at once considered important due to the point it presented, but also dismissable because of its blatant sexuality.

When are you planning on releasing the finished movie and where will be able to watch it?
Our next steps after fundraising and post-production will be submitting to our project to film festivals, like Slamdance and SXSW, in the coming months. Anticipate a premiere of our film by Spring 2019.