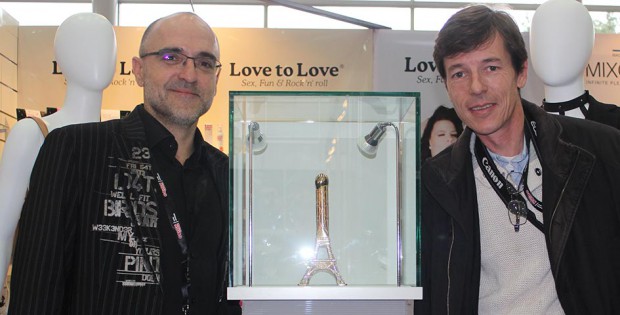 Your Product ‚La Tour est Folle’ has been on the market for some time now. When did you get the idea to release a new, special version of the product?
Sébastian Lecca: A year ago, a new partner joined the La Tour est Folle company. As he’s a jeweller by trade, that idea was just the next logical step. We were very busy at that time, working on the new silicone Tour est Folle with its built-in 10 functions vibrating module, which we were co-creating with the Adrien Lastic brand. In any case, such a piece of jewellery wasn’t something we could have done on our own but our new partner could, and he did (mostly for his own sake).

1,5 kg of gold, featuring 676 diamonds… this luxurious edition of ‘La Tour est Folle’ is a product which most will probably never be able to afford. How much does it cost?
The ‘676’ costs 250,000 EUR! Even if it’s obviously not something anyone can afford to buy, it does target a specific group of customers. It was made from 1.5kg of 18-carat-gold and 676 diamonds …hence its name. All those diamonds amount to exactly 115 carats. The biggest ones are weighing up to a third of a carat and are of ‘Wesselton’ quality – a well-used term experts will certainly be familiar with. Far from just being a regular sex-toy, it is a truly magnificent work of art, a jewellery masterpiece as unique as it is monumental.

Is this the most expensive toy the world has seen? Is this a case for the Guiness book of world records?
It currently seems to be the case. As far as we know, no one else is claiming to make a more expensive sex-toy than what the ‘676’ costs today. There is no such category in the Guiness book and it would be very complicated, not to mentioned expensive, to ask for one. More to the point, if record breaking was what we were aiming at, it would only be too easy to break that one. It will always be possible to create a new sex toy, just as unique, with even more gold (or platinum) and more diamonds (or even rarer gemstones). It could be shaped as a Tour est Folle but it could just as easily be made to look like your own sexual organ, or clitoris, or even the inside of your vagina thanks to 3D wax printing. It has turned a very fastidious process into a much easier one for the jewellers. Today, anything you fancy is possible. The ‘676’ is proof of that. Anything you wish for, we can do.

Did you create this particular version to actually sell it, or was it made for advertising and promotional purposes? The press is probably quite keen on reporting on the most expensive toy in the world?
Even if the ‘676’ is currently for sale on our website, it’s mainly just for show as that specific model is the property of our partner and he wishes to keep it. However, we do have the means to reproduce it exactly or even to customise ti to any requirement while still maintaining the highest French quality standards for fine jewellery. And we can do even better now thanks to our partner and the experience we’ve gained from creating that first toy.

La Tour est Folle has many other projects that are sure to get press attention, as we’re expending to broader fields (such as art and interior design): We want to play our part making pleasure objects a part of our daily environment.

“Far from just being a regular sex-toy, it is a truly magnificent work of art, a jewellery masterpiece as unique as it is monumental.”

This golden toy would not look out of place in an art museum. Was this planned?
Of course. Our partner is understandably anxious about the safety of his masterpiece and it was a hard-fought battle just to get him to lend us the ‘676’ for eroFame.

Everything went fine and it was a huge success! Following that first success, we’re now hoping to be able to exhibit it to the public at the Las Vegas convention! La Tour est Folle has already been displayed in many art galleries in France and around the world (in the US and even as far away as Japan), so there is no lack of places where people will want to see such a prestigious item. The only real concern is safety issues.

Can you give us a bit of information about the manufacturing process? Is it more difficult to make a toy out of gold rather than silicone?
In France, jewellery is an age-old craft which hasn’t been outsourced yet and isn’t likely to be any time soon. When it comes to expertise and skills, France has very few rivals in that area. So yes, it is difficult, but the necessary skills for such a creation can be found in France and, based on previous experiences with La Tour est Folle, we know that silicone can be just as tricky to manufacture. When fashioning the ‘676’, we started from a drawing done by me, Sebastien Lecca, which was then turned into a digital drawing and a 3D print-out so as to have a wax model. The wax was then shaped to get the diamond-setting ready and later, the gold was melted.

The solid gold casting which came out had to go through a great number of ‘adjustments’ before the diamonds could be set. It took several weeks for the 676 diamonds to be set: the process was made a lot harder because of the size of the model: The jeweller could not fix it in place firmly enough to lean on it when setting the diamond as he would when setting one on a ring. You have to get very creative to find ways to hold the golden Tour est Folle in any given position before being able to start setting, and you can only do a few diamonds at a time. Then you have to start the whole process again for a couple more, and again! The jeweller couldn’t do more than 40 a day! He really gave it his best though, and the result, once all the final touches were made, is a true reflection of the French expertise when it comes to jewel-crafting.

At least you can be sure that no one will copy your product, right?
It’s a truly unique model but quite easy to copy. Provided you can afford it, we can provide you with the means to reach or even top that level of quality, with a very meticulous selection of diamonds or gemstones for a touch of colour such as rubies, sapphires or emeralds. And it can also be made from platinum, gold, palladium… Gilded copies with rhinestones are not really of any concern to us.

Is it correct, that the gold version was never shown at a public event before this year’s eroFame show? What was the response like?
It is true. The eroFame show was the first time we were able to show the ‘676’ at a show. And there was quite a response. It literally stole the show from the silicon La Tour est Folle with its built-in 10 functions vibrating module, the new product we were launching with Adrien Lastic, Eropartner, and Lovely Planet, our exclusive distributor in France. It was displayed behind a reinforced glass case and only once, from 11am to 3pm on the second day of the show. We really wished we could have displayed it again on the next day, but it couldn’t stay in Germany for insurance reasons and had to be sent back to Paris, but to be honest, we didn’t really get why that was necessary.

A quarter of a million Euro’s is a lot of money. Do you keep the golden toy at a secret place or in a safe?
Our partner is very careful, as one should be in his trade: We don’t know where the ‘676’ is kept and it was already hard enough to get him to lend it to us! My colleague Thibaut had to sign all kinds of insurance paperwork and he had to carry it in a reinforced suitcase (with 3 GPS tracking devices!) cuffed to his wrist. Carrying the 1.5kg gold Tour est Folle in that fashion was pretty taxing. It is true that it is a lot of money, however it isn’t much more than some luxury cars and you don’t have to be cuffed to them! Our real pride lies in the fact that it is truly a magnificent object one can’t help but being enthralled and spellbound by. And we really want to make more, even better ones.