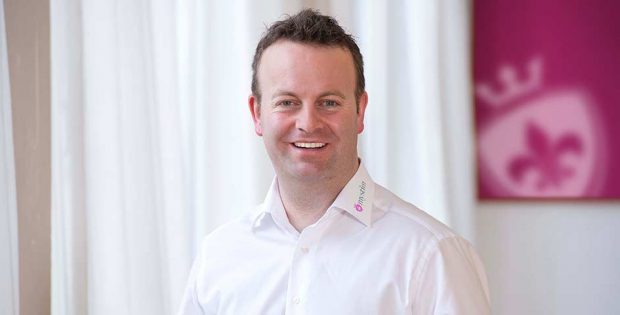 The first reactions are in, and they indicate that Mystim GmbH has hit the sweet spot once again with their latest innovation, a masturbator with electro stimulation features named Opus E. As we learn, it took a long time for this project to actually get going. The basic concept was developed several years ago, but for the longest time, there simply was no way to realise it in a way that lived up to Mystim’s high standard. And when the team finally tackled the project, it took them two years to put together the product that is now hitting the shelves. In our interview with Christoph Hofmann, the founder and CEO of Mystim GmbH, we talk about the development of Opus E, and he tells us why all the hard work that went into the project will pay off.

When did you get the idea to combine a masturbator and electro stimulation?
Christoph Hofmann: The idea of creating a toy with both features – all the advantages of a masturbator and the intense sensations of e-stim – was not exactly new. As a matter of fact, we had already developed a similar concept in 2010, and we got the patent for it in 2011. However, we never really created that patented product, and it never went into production. We simply weren’t 100% happy with the concept, and we didn’t want to compromise, not when it came to things such as the look and feel of the sleeve or controlling the stimulation current. Over the course of the years, we developed several concepts, only to dismiss them again. It was only about two years ago that we finally arrived at a concept that felt right – the Opus E concept. And now, several layouts, prototypes, and fine-tunings later, we are unleashing it upon the market. The feedback we received during recent trade shows was great, and the sales figures so far prove that we have been right to believe in this concept.

So, is Opus E the first product to combine these two elements?
Actually, there was a producer who tackled the concept of an e-stim vibrator before, but they approached it from a very different angle, and the products couldn’t be more different. We are very proud of the level of sophistication inherent in Opus E: Thanks to our Cluster Buster and Sultry Sub Black, you can use Opus E wirelessly; we have developed a high-quality sleeve that is up there with the very best (non-e-stim) masturbators in the market; and we have conductive areas on the inside of the sleeve, made from a material that was developed specifically for this toy, called Electroskin. That is pretty unique. The aforementioned product by our competitor merely uses the lubricant and the water included therein to create a conductive surface for electronic pulses.

What are your expectations regarding Opus E? And how did people respond when you first presented the product at ETO Show in early March?
We are confident that Opus E will be a top seller for Mystim. There is no comparable product on the market – a high-quality masturbator that offers the best of both worlds: realistic feeling and intense electro stimulation. Also, we believe that this is a concept many people have been waiting for, and not just the Mystim fans, not just the fans of electro stimulation. Opus E is an appealing option for any man who wants to experiment with a little extra stimulation. Our E-stim vibrators already proved that you can get new target audiences interested in this world of stimulation that ranges from soft and tingling to intense and pulsating. And we hope that we will be able to achieve the same success with Opus E. The visitors at ETO Show were thrilled about the product and its features, and the feedback we’ve received is overwhelmingly positive – which is always great to hear.

How long did the development process take, from first idea to finished product? Which hurdles did you have to overcome along the way?
It was about one and a half or two years ago that we first started working on the design that is now Opus E. As for the hurdles we had to clear, there were many of them. We had to find a material that feels real, that is skin-friendly, and that supports electro stimulation. Also, we had to work out how to create the conductive areas to send the electrical pulses from the base of the penis to the tip of the penis. And we had to find a simple solution for cleaning the various components of our Opus E – which also meant finding a way to connect the conductive surfaces and the contacts wirelessly because otherwise, you wouldn’t have been able to remove the sleeve to clean it. Now, we are 100% happy with the result, and we are very proud to present these three new products to the world.

Why did you pick the name Opus E? Is there a deeper meaning behind this name?
The name of our masturbator includes the Latin word opus, which means work of art, and believe you me, Opus E is definitely a work of art! Or at least that’s how we feel about the product. And E is for e-stim. Also, if you say the name quickly, it sounds like ‘Oh Pussy.’ And we like to add that kind of humorous aspect to our product names. 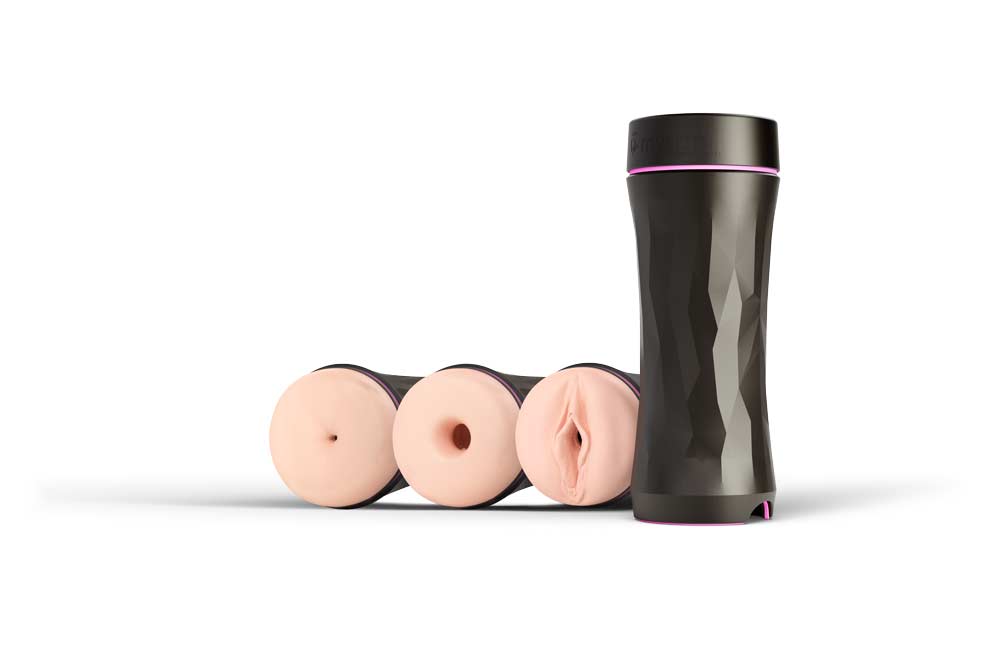 Could you tell us more about the elements that make Opus E stand apart from the competition, from the design of the outer case to the sleeve and the technology, i.e. the electro stim feature?
Opus E is available in 3 versions: A lifelike vaginal version, an anal version, and a neutral, donut-looking version. All of these three models are hidden in an elegant, dull black case with crystalline structure. This gives our new toys a high-quality look that is very distinctive and distinctively male at the same time. As far as the case itself is concerned, the dimensions and the ergonomic aspect were just as important as the design, after all, we didn’t want Opus E to look or feel clunky. It needed to fit perfectly in the user’s hand. The extremely realistic-feeling, soft material of the inner sleeves was made without plasticisers or PAHs, and the inside is structured – a different pattern for each version of Opus E – to provide additional stimulation. The donut and anal versions have a nifty pattern of nubs and grooves on the inside, and the vaginal version is extra elaborate in that regard, as we used materials of varying hardness, structures, and shapes. On top of that, the shape itself is obviously based on the female vaginal canal, making for an uncannily realistic experience. And if you want this experience to be even more intense, you can add electro stimulation. The electronic pulses are transmitted to the penis via conductive strips on the sides of the inner sleeve. When designing the sleeves, we also made sure that the stimulation gets more intense the deeper the penis is inserted. This way, you can control the intensity of the pulses without having to change the settings on your power box. And if you combine Opus E with the Cluster Buster and Sultry Sub Black Edition, it’s all wireless and you can remote control every element of the experience.

The big selling point of Opus E is the electro stimulation element. What other Mystim products does the consumer need to really get the most out of this experience?
Actually, the user does not necessarily need another Mystim product to enjoy the e-stim component. The product comes with an adapter that can be connected to pretty much every power box on the market. And if you prefer a Mystim device, you can choose from the Tension Lover or our Pure Vibes. To get the ultimate experience, we recommend combining Opus E with our Cluster Buster and the Sultry Sub Black Edition because – as I mentioned before – they enable you to use Opus E completely wirelessly and remote control the product.

Who is the target audience for this product? Men looking for masturbators that offer more than just ‘in and out’? Or electro stim aficionados?
When we launched our e-stim vibrators a few years ago, many of them were bought by customers who already knew and loved electro stimulation. But as we learned, there were also many buyers who didn’t have any previous experience in that area, and our product was kind of a gateway into the world of e-stim for them. So, we hope that Opus E will also appeal to both of these audiences.

Opus E is a very sophisticated product, boasting a number of features? How does that affect the price of the product?
Our retail price recommendation is EUR 89.90. Given the many advantages of the product, we consider this to be a very favourable price-quality ratio.

What about POS materials? Which tools do you offer to retailers so they can create awareness for Opus E in their stores?
To support the sale of Opus E, Mystim has created a number of POS materials for interested retailers. Apart from shelf talkers, postcards, posters, and roll-ups, there are also sales displays including a 7“ video screen for our explanatory info video. And if retailers place an order for at least 10 Opus E, they even get this display for free. In addition to all that, we obviously offer materials such as product texts, images, and videos to support the retail trade.