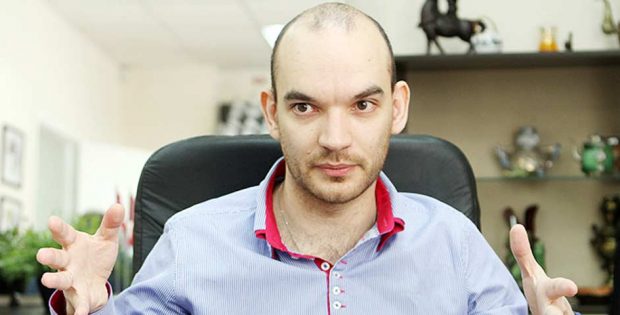 In 1992, during the turbulent transitional period following the fall of the Iron Curtain, one of the first adult companies of the Russian Federation was founded in Yekaterinburg. And even now, 25 years later, Kazanova 69 still ranks among the pioneers of the adult market – and beyond. The retail company has made a name for itself in more ways than one, for instance as a proponent of sexual health and as the operator of an erotic museum in their home town. Following lengthy renovations, said museum was reopened on the occasion of this years’ Night of the Museum. Dmitrii Shchepin, the Director of Kazanova 69, tells us more about the exhibits and about the status quo of the adult market in Russia.

Last month, more visitors than usual flocked to the „Museum about IT“ in Yekaterinburg. What was the reason for this onrush?
Dmitrii Shchepin: The main thing was that we moved the museum’s location and changed our concept. Previously, the museum was very small and was popular more because of events we organised and not so much because of the exhibits. Also, there was little room, and we received lots of feedback and suggestions from guests who wanted us to enlarge the museum.
Now, we have a big, modern facility with loft-style design and lots of new historical items and their stories. We announced the big new opening and people were happy to come.
The other reason was the international Night of Museums, an event that motivates lots of people to go to museums, all at the same time.

In your opinion, which item in the museum stands out the most or draws the most attention?
The main artifact is a mammoth bone that is placed in our museum. It was a present to our museum from the Yakutia region in Russia. It belonged to the descendant of a shaman who used this bone to increase sexual power and raise fertility among his tribespeople. Now, we have reviews saying that it still has power, and people come to see it and “recharge their sexual batteries”

The company behind the museum is Kazanova 69. Not only did it create the museum, but it is also one of the largest and oldest retail and wholesale companies for intimate goods in Russia. Could you give us an overview of the company and tell us about your role in it?
Yes, correct, our company is one of the oldest and biggest in Russia, we started in 1992, just after the USSR collapsed, so in 2017, we crossed the quarter century mark. Today, we have a chain of 15 stores, two wholesale departments in Yekaterinburg and Moscow, the Love and Erotic museum, a training club for sexual practices, and a coffee shop for lovers.

Where do you see the strong points for Kazanova 69 and what sets the company apart from its competitors?
The strongest point in wholesale is our 25 years of experience in retail sales. All our stores are called “health stores” – that is written on every signboard, and it correctly describes how we work – we sell people items for their health – physical, mental, psychological. We help them have healthy relationships with their families, not just their partners, but also their children, for whom it’s obviously good to have happy parents.

Are there certain brands, products or categories that are selling especially well at the moment? Where do you see the most important trends in the adult market right now?
The market in Russia is special because we still have to create it every day. I mean that people are still wary of anything concerning sexuality, and that’s why every customer receives a course in sexual education when they come to us. So, it is totally our choice what will be more popular. We choose what we consider to be the best brands from all over the world and we know how to sell them to the Russian consumers – that is also big advantage of our company.
These days, we do our best to promote the “smart” and interactive items.

Looking ahead, how will the market change in the future?
I feel the future is all about hi-tech items, so more and more attention will shift to that segment, because these products are perfect to be built into modern our life in which everybody is addicted to their smartphone. Also, I see the Russian market turning away from “no-name” products and embracing international brands very quickly. And of course, products that have a positive effect on people’s health will always be very popular among our customers.

House brands are an important topic for many wholesale companies in the adult market nowadays. Does Kazanova 69 also offer their own brands?
We have started production on several food supplements for sexual and general health, but we do not produce our own sex toys. We would only do that if we had an exclusive idea. For our food supplements, we are working with Russian and Chinese pharmacists and technologists to produce a really effective product for men and women.

Does Kazanova 69 support other organisations or projects as well, apart from the Museum about It?
Yes, we have several ones – museum, training club – where men and women can learn how to have good relationships, including sexual themes; then there’s Coffee 18+, the unique coffee shop for adults, where we serve drinks and desserts with our aphrodisiac supplements. Additionally, we have several ecological and social projects, for example, our team plants about 20 000 trees in Russia every year. Also, we own and operate a company that sells colourful socks in wholesale, operating through the same channels we also us to distribute some other brands.

How would you describe the current economic situation in Russia and how is it influencing your business?
The currency rates influence the price, so from 2014 onward, we have had to raise prices for our goods. But even an economic crisis can help a company to grow. We believe that, in such times, people try to create the safest place in the world for their families, so demand for our products and this market as a whole increases. Generally speaking, we feel that that economic situation is much better than what is being described in the mass media.

Several western nations have levied against Russia, and it doesn’t seem as though they were going to be lifted any time soon. Have they affected the adult industry at all?
Only in the way I described in the previous question. Russians are strong people. We have seen through lots of difficult times in the Soviet period and in the 1990s, so now, the people in Russia are happy, that is what I see.

What are your plans for the future of Kazanova 69? Where do you want the company to be in five years?
As we say in Russia “If you want to make God laugh – tell Him about your plans.” Seriously, though, we are trying to create new and unique projects every day. We will continue to increase the quality of our service in all areas and provide a positive image of Russians in the world.