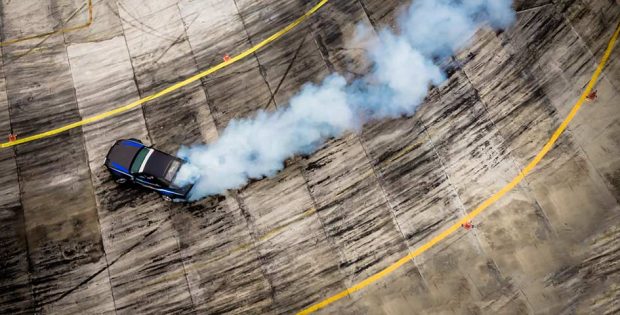 “Our industry is spectacularly failing to apply as much insight, study, research and examination to this universal area of human experience, versus the extraordinary amount of effort we put into every other human attitude and behavior in every other area of life.”

She surmised: “It’s utterly ridiculous. I find it astonishing that brands and clients and agencies dig deep into every aspect of human attitude and behavior, but not this. Ever.”

My mind subsequently went into top gear, conjuring up images of brainboxes at Land Rover’s Special Vehicle Operations division working hard to come up trumps with some wonderful accoutrements for a gorgeous Range Rover that would have Christian Grey or any real life rich seducer salivating (it would certainly make a nicer change from them having to produce armoured and bulletproof versions for clients in high-risk environments). Detachable bondage restraints, perhaps? Or some plush velvet curtains to prevent an external audience gathering? The mind indeed wanders. Not so much Range Rover per se as Range Romper (if this ever does come to fruition, by the way, I’m bagging the naming rights).

Back on planet Earth however, practicalities, financial and shareholder concerns rule the roost. This in turn makes Gallop’s wishes for everything from automobiles to kitchen counters to be wonderfully sexed up a bit of a stretch. And considering the latter for a moment, how many times would someone need to get intimate on a kitchen counter to justify the price of a counter that as well as satisfying the primary requirement of, well…preparing food and so on, enables it to handle ‘hot buns’ of a much different variety? For members of the sploshing/WAM fraternity, this could be quite the thing, with a variety of indentations and other ‘kitchen’ accessories available. But for the infrequent kitchen kinkster, how viable would it really be?

While talking about sex is no problem in this industry, it’s a different story for major brands whose existence mainly revolves around satisfying non-carnal needs. And for the vast majority of them it will be one step too far. How will shareholders, institutional investors, or The City in general, react?

Furthermore, far be it for me to put a negative spin on things but I can’t help but think that while there’s seldom any outrage or criticism placed on car manufacturers when someone is killed or maimed by a drunk driver driving a particular model or brand, mainstream media would waste no time at all swarming like proverbial locusts upon a carmaker and its management in the event of a sexual incident (alleged or otherwise) occurring in one of their ‘sexed up’ vehicles.

Then there’s the actual consumer to think about. What percentage of the time spent in the car will actually be devoted to sexual tomfoolery, compared with getting to and from work, going to the gym, popping over to see the parents, doing the supermarket and school runs, etc. etc. ? And closer to home, what are the ‘curtain-twitchers’ and local gossipers in the street going to be saying about the car and its owners? In truth it appears there’s more than a few potential downers to be considered if owning a blatantly publicised ‘sexed-up’ car.

Just because consumers may not want to advertise their sexual proclivities, it doesn’t mean that they’re shy and retiring shrinking violets. Mais non: they can be swinging from the chandeliers and getting up to all sorts of kinkiness. They just want to keep it under the radar.

Momentarily returning to the article, when the writer contacted half a dozen or so big carmakers for their take on Gallop’s ideas, he was met by silence. But kudos do go to luxury brand Aston Martin, whose vice president and chief marketing officer was prepared to stick his head above the proverbial parapet to offer his take on it. And while as perhaps expected, he somewhat poured cold water on Gallop’s red hot plans, citing the lack of commercial reality and previous absence of sex as either a key marketing component or in R&D, he did nonetheless highlight one distinct possibility: the aftermarket.

And this is where, in my opinion, Gallop’s initial rallying call should have been directed towards. I don’t see major household brands and their holding companies rushing to get all down and dirty selling proprietary items. The possible exception is a yearly Valentine’s Day PR stunt to grab some exposure but which still keeps the actual sex at arm’s length.

And let’s be honest: our economies thrive on risk takers (and in this industry risqué-takers) who can be much quicker bringing something to market, can react quicker to current issues or trends without it being endlessly debated by top heavy management and a plethora of different departments all adding their tuppence worth to it, as is often the case with corporate behemoths.

So, if you want to jump start your own ideas for launching a new product or two for petrol heads with passion in their pants, and offer them the chance to get into car trouble of a far more enjoyable sort, then go for it – full throttle. And in the meantime, and much to everyone’s relief, I’ll refrain from employing any more automotive puns. I’m moving to the kitchen counter now!