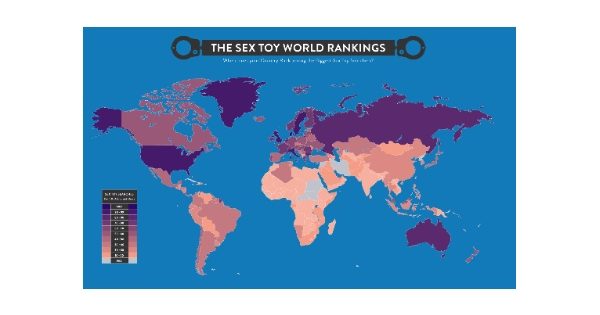 Apart from a cold climate, Sweden, Denmark, and Greenland also have one other thing in common, namely a penchant for sex toys. At least, that is the result of a study conducted by renowned online portal vouchercloud.com. The goal of this study was to find out more about the online habits of consumers all over the world.

Taking the top spot with 118 sex toy-related online queries per 1000 internet users is Denmark, followed by Sweden with 115 queries, and Greenland with 108 queries. Missing the winners’ podium by a hair’s breadth is the USA with 104 queries. Next is Great Britain with 96 sex toy queries per 1000 users. Rounding out the top ten are the Netherlands (88 queries), Russia (87), Bulgaria (86), Italy and Australia, both with 82 queries. Surprisingly, France only comes in at position 15 as 72 online queries per 1000 users relate to sex toys in the country of romance. Even further down the list, we find Germany (65), ranking 22nd, and Japan (44) ranking 43rd. Still, Europe has a very dominant position in vouchercloud.com’s Sex Toy World Ranking, accounting for 23 countries in the top 30! It is not really a surprise that South America and Africa can’t keep up with Europe, but the fact that Asia lags behind quite significantly is rather unexpected. And even though Denmark and Sweden top the list, this shouldn’t be considered as proof that the whole of northern Europe is crazy for sex toys. After all, Finland only comes in at position 16, with Iceland ranking even lower, at position 38. There is also a big difference between the British (taking the fifth spot on the list) and the Irish who lag behind by quite a margin, with only 71 sex toy-related search queries per 1000 users.

“A somewhat unique dataset has revealed some truly interesting findings surrounding global love-making. We’re a little surprised that the UK has offered an extremely strong showing, particularly with such reserved English stereotypes. However, the Nordic nations have definitely put the rest of the world to shame. There’s more than one way to deal with the cold, after all!” says Chris Johnson, Head of Operations at vouchercloud.com, commenting on the results of the study. As the basis for their ranking, Vouchercloud used 18 of the most popular sex toy products and search terms from the online pool of Lovehoney. These included general terms such as ‘sex toys’ and ‘dildos’ but also definitions and specific product names. Each of the 18 keywords and their international equivalents were then entered into the Google Keyword Planner to determine their global search volume. Based on these figures, Vouchercloud established how many online-going inhabitants in any given country search for certain sex toys. To weigh the results against each other, Vouchercloud took into consideration how widespread internet activity is in the various countries and how popular Google is as a search engine in these markets.

Tags:Business, Toys
Back to Front Page