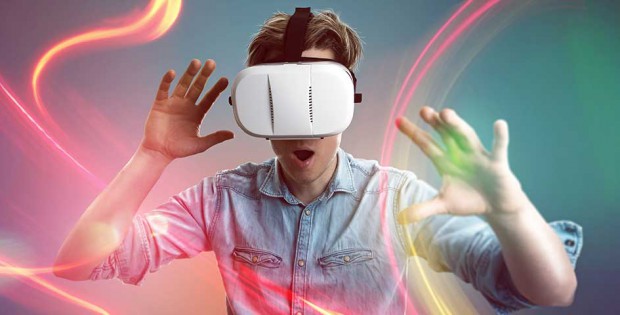 At the moment, few technologies elicit as much enthusiasm as the latest generation of virtual reality headsets. Ever since Facebook shelled out two billion dollars in 2014 to buy VR goggle producer Oculus Rift, it has been clear that this is big business. Last year, the technology found its way out of the labs and into the consumers’ hands in a big way, and companies from a variety of markets have jumped on the VR bandwagon – including the adult industry.

If you want a to enter the virtual reality, you first need the right headset – usually boxy goggles that create a new world before the user’s eyes. A variety of models from numerous producers are available right now, ranging from rather simplistic devices that require a smartphone all the way to fully-fledged VR machines that cost close to 1000 dollars.

Proper headsets obviously offer better quality, but they also put much more strain on the consumer’s wallet. For instance, the going rate for an Oculus Rift headset is roughly €700, Vive from tech company HTC even costs €900. Compared to that, Samsung’s Gear VR Headset seems like a bargain at €90, however, you also need one of the Korean producers’ latest smartphone models. Owners of Sony’s Playstation 4 can also choose another option – a VR headset created specifically for the gaming console. It costs €400, and at the moment, it is the most widespread VR solution.

As Todd Glider adds, it is these prices that make Google’s new VR project, named Daydream, so interesting. Basically, it is the next evolutionary step up from the Cardboard, i.e. another smartphone-based solution. However, the software is tailored to the requirements of VR, allowing for more complex, more immersive experiences and greater ease of use. The first Daydream-compatible smartphones are already available on the market, and soon, more will follow. The price for this VR system will be somewhere between the simple Cardboard models and deluxe headsets such as HTC and Oculus, meaning Daydream will offer acceptable quality for the masses. “Most people are not going to jump from cardboard to Oculus Rift or HTC Vive. They’ll jump to a mid-range device,“ Todd explains. “With Google Daydream, we see many, many more manufacturers agreeing to release phones supporting the platform. That gives the entire market a nice kick.“

Navigating the virtual worlds often requires a controller – held by the user like a video game controller – or cameras that enable motion controls. But when it comes to pornographic content, there are a lot more options because numerous sex toys are VR compatible, allowing for the most immediate experience of interactivity.

One such toy is SenseTube, a masturbator developed by up-and-coming company SenseMax. “SenseTube can be used as just a masturbator, but you can also synchronise it with our SenseNow app to enjoy VR videos,” says Dominique Lecapre of SenseMax. “These 360 degree videos are connected to the SenseTube, meaning that the images follow the motions of your hand.” This combination of what the user sees and what the user feels is one of the greatest elements of the new VR technology, making for a truly unique experience.

But before consumers can enjoy this kind of automated stimulation, the videos need to be adapted accordingly. So-called meta data has to be added to account for the movements of the toy. Eddy Olivares, CEO of Lovense, explains the process: “This meta content tells the toy what to do. It basically requires someone to go through every second of the video and ensure the meta data syncs properly, like someone would do if they were subtitling a video.“

There are also developments on the content side of things. Films and games are created particularly for VR. “Virtual reality can be divided into two categories – 360 degree videos and computer generated imagery,” is how Dominique Lecapre describes the possibilities users can choose from. “Both technologies help to create awareness and demand for virtual reality content, but what’s really furthering this development is that online giants like Facebook and Youtube are starting to embrace 360 degree videos.” There is particularly strong growth in the field of 360 degree porn videos. Today, even the big “free” portals offers VR content. Apart from that, there is a number of paysites that focus on high-quality VR scenes. At realitylovers.com, for instance, users can choose from more than 60 films that have much higher production values than you usually get with this type of content.

René Pour, head of Reality Lovers explains that, compared to regular productions, the aspect ratio in VR videos is much wider, which means that you have to plan accordingly when selecting a location and setting up the lighting. And shooting the scenes is not the only thing that’s more demanding; the post-production process, i.e. putting together the videos, is also much more elaborate, with new things that need to be taken into account. But as René emphasises, the work is worth the while because the result is truly stunning. “You think ‘hey, I’m really in this!’” At the moment, everything is passive, and the user is ‘only’ an onlooker, but still, the experience is much more intense than what we’re used to from 2D productions.

René Pour also feels that there is a bright future for this kind of content. “The consumers’ readiness to pay is definitely greater,” he says in answer to the question if consumers are willing to pay for his videos even when there is so much free content floating around the internet. As far as targeted traffic is concerned, the conversion rate is about 15 times higher than the conversion at traditional paysites.

Many experts share the assessment that the market for VR hardware and content will see tremendous growth throughout the next years, inside the adult realm as well as in the mainstream market. A Goldman Sachs study that was already published in early 2016 predicts that, by 2025, 50 million to 300 million VR headsets will be sold.

Compared to that prognosis, the actual sales figures for 2016 seem rather sobering. While there are no final sales figures for the year yet, market researchers expect that, over the course of the past year, less than three million VR headsets actually found takers. Nonetheless, industry experts believe that 2016 was a big turning point in the history of virtual reality. The first truly user-friendly products saw the light of day, and we got a lot of improvements as far as content was concerned – be it adult videos or other types of virtual reality content.

So it’s no miracle that many companies in this segment are very optimistic about the future: “Eventually, more devices will be connected to one VR storyline and then you will start to see augmented reality, where you will have the porn star in your room,“ says Op de Beek, sharing his vision of adult VR content in the near future. Lovense CEO Olivares also believes that increased hardware sales are more than probable, however, he doubts that the technology will be making any big leaps in the next few years. Also, he adds, the adult industry depends on the big players in the VR segment, and content producers have little choice but to follow the trends dictated by the big guys. “Mass consumption of VR is likely 10-20 years away,“ he says. „Until that happens, and we see how VR in general is being consumed at scale, it’s hard to predict the future connection between sex toys and VR content.“