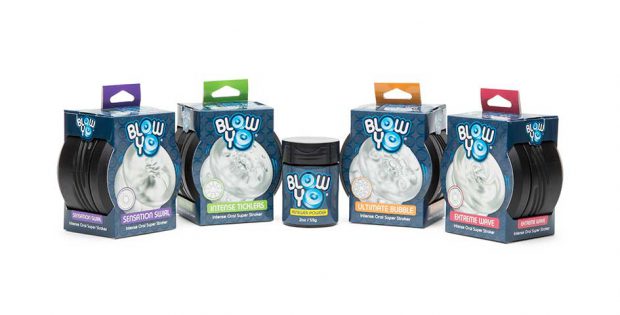 Lovehoney announced that their latest innovation in male sex toys, BlowYo, is shipping now. Designed for solo play or as an addition to oral play session with a partner, BlowYo is a male stroker that creates the sensations of oral sex. Designed with two solid rings at either end of a super-stretchy, twistable sleeve, with four different textures inside.

Each texture has been developed and engineered to give various sensations which can be adjusted by the end user with the application of pressure to the outside surface. The toys are Phthalate free and were created using ABS plastic inserts which were overmolded with a TPE material, a low Shore Hardness.

BlowYo has been described by an independent sex toy reviewer as “the closest to a blow job I’ve ever felt from a toy,” and was the brainchild of an entrant from Australia in Lovehoney’s annual Design a Sex Toy competition in 2015. It has taken 2 years to bring the design to life. The competition invites sex toy enthusiasts and designers to come up with an innovative idea for a sex toy with the winning creation then being developed and produced by Lovehoney to sell to customers. Previously, the competition was won by Trevor Murphy who invented the Sqweel oral sex simulator which became a success worldwide, featuring in movies and on the Jay Leno show in USA.

Lovehoney, who estimate that the male sex toy market is worth roughly $1billion, also recently surveyed 14,000 people with the survey uncovering that 64% of those thought that male sex toys could become as popular as sex toys aimed at women, and 76% said that men who hadn’t tried male sex toys were missing out.

Jim Primrose, Lovehoney International Sales Manager ROW comments: “Taking in to consideration the survey results, we hope with BlowYo we can tempt as many new customers as possible to try something a little different. It really is a revolutionary male stroker, there is nothing out there quite like it which creates the same intense sensations of intense oral sex. To really help the product stand out we have some impressive supporting POS. ”

BlowYo comes in a plain black container for discreet storage and portability. Additionally, BlowYo renewer powder is available to condition the stretchy TPE material and keep it feeling soft, supple and just like new. In addition to the products, there will be a supporting range of eye-catching POS. The pack includes a header, 2 side graphics, 1 footer graphic, 1 strip graphic and 5 wobblers.

Tags:Masturbators, Men
Back to Front Page