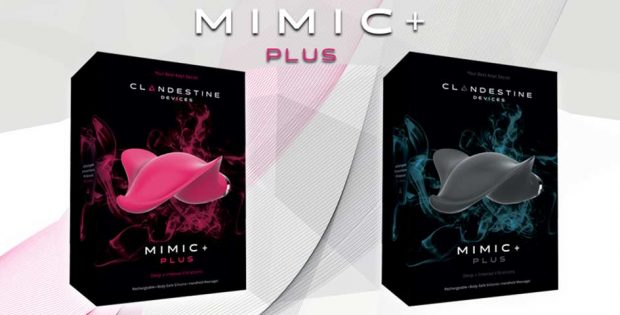 Clandestine Devices announces the official release of its latest product, MIMIC + Plus. The MIMIC + Plus will be in-stores in October, ready for the holiday season.

Coyote Amrich, director of purchasing & product development for Good Vibrations and Babeland. “I was excited to feel the deeper, rumbly vibrations of Mimic + Plus and think it’s going really expand the reach of Mimic’s fan base. Plus – those colors!”

The brand-new curved handheld rechargeable toy comes in two brand-new colors, Magenta and Stealth Grey, and its slightly larger size accommodates a more intense motor and supportive battery. The MIMIC + Plus still has an LED beacon, but its charging indicator is now 50% dimmer.

“The Mimic is a uniquely designed toy that really is a natural extension of the hand,” says Angela Wells, Founder & CEO of Vibrant. “We had the pleasure of seeing the Mimic + Plus at ANME this July. We are ecstatic over the awesome design with more power. We are always happy to partner with brands like Clandestine Devices. They are a company that share our same set of values – body-safe, pleasure focused, and inclusivity.”

The package size has also been scaled down for a sleeker appearance and feel, and the MIMIC + Plus powers on at its lowest level for improved ascension through six rumbly vibration speeds and eight vibration patterns, with a new magnetic charging connection that gives over 2 hours of pulsations on a single charge.

“We already love the MIMIC and our team knows that it’s a uniquely versatile product,” says Megan Swartz, General Manager & Buyer for Déjà vu. “The MIMIC + PLUS will be a perfect addition in our stores because we already do so well with the original when we explain the many ways to use it – the PLUS has all of those benefits and will provide an option for a whole different channel of guests that are looking for that level of vibration. Our team is also very excited for the new colors!”

Like its predecessor, MIMIC + Plus is made of FDA-approved silicone, is fully submersible, and offers a private travel lock. Always supported by a 1-Year Warranty, users can look forward to a multi-lingual user guide as well.

A few weeks ago, the MIMIC + Plus was unveiled at the ANME Founders Show, which was held in Los Angeles. “We are so excited to have introduced the MIMIC + Plus to ANME show attendees, who have been so supportive of us and our original MIMIC massager,” said Clandestine Devices’ Director of Operations Kimberly Faubel. “The larger size and more powerful motor was specially crafted with the intention of giving our less sensitive users a stronger sensation for overall satisfaction. The response was incredible. Now it is time to show the world!”