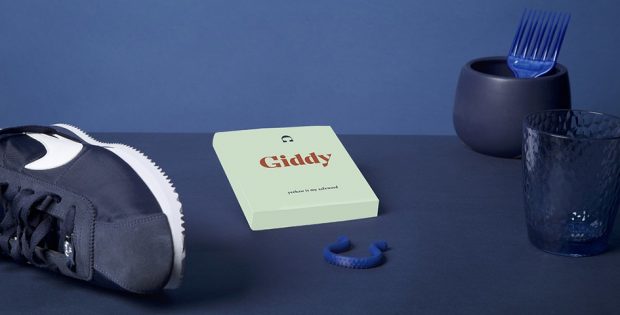 According to its makers, Giddy is the first utility patented device created specifically for the treatment of ED in over 20 years. While many ED solutions, like prescription medications, are byproducts of medications for other conditions, Giddy was carefully designed by a committee of mathematicians, medical device experts and ED specialists for the sole purpose of helping men gain and maintain erections for sexual intercourse and the treatment of erectile dysfunction.

Giddy’s official launch debuted as a month-long campaign on Indiegogo, a crowdsourcing platform for preordering and backing new products and companies. Interested consumers have the option to purchase discounted one, two and four packs of Giddy with shipping guaranteed by the end of August 2019.

Every purchase also comes with a holistic 30-day ED treatment guide that not only demonstrates how to use the product, but helps guide men who struggle with ED to have conversations with their partner(s). The guide also incorporates supplemental exercises and lifestyle changes that they can make to improve their ED over time.

As part of Giddy’s official product launch, the company has teamed up with partners like non-profits ZERO and Malecare, and celebrity spokespeople such as actor Danny Trejo, model Tess Holliday, Real Housewife Gina Kirschenheiter and Olympic medalist Jason Rodgers. Each of these partnerships have been formed with the intent of opening up the conversation around ED, spreading awareness about the benefits of getting regular prostate exams, and bringing attention to the importance of open communication and healthy sexual experiences.