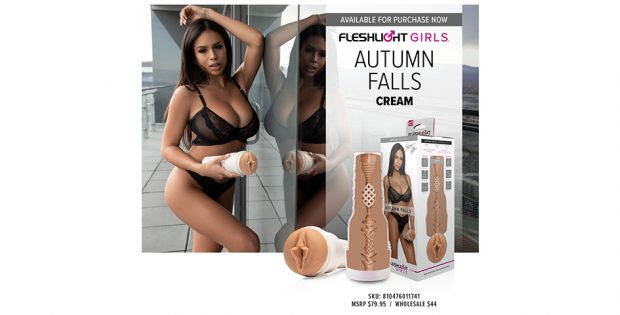 The Autumn Falls Cream Fleshlight is a medium-flesh colour like the Janice Griffith Eden Fleshlight. Her Fleshlight is everything a man would expect from this Puerto Rican pornstar sensation. Behind her tempting tanned labia the user will immediately meet a variety of tantalizing textures featuring dense pleasure bumps and a waffle cross-grid with waves of an intermittent tightness throughout. Since Autumn’s Fleshlight were launched on retail website on December 2020, she fast became one of the best seller Fleshlight Girls. Nowadays, she has stolen the second position on sales to the amazing Stoya Destroya, the company says. Autumn Falls was born on August 4, 2000 in Puerto Rico but she was raised in New York City, USA. Shestarted working in the adult film industry at the age og 18 years. She has shot dozens of films since joining the industry and has received a number of awards during her career. The adult film actress has more than 1.6 million followers on Instagram and 544,000 followers on Twitter. In addition to her Instagram account, Autumn Falls has her own OnlyFanss profile where she posts sultry and too-x-rated-for-Instagram photos for her followers for a subscription fee.

Tags:Masturbators
Back to Front Page