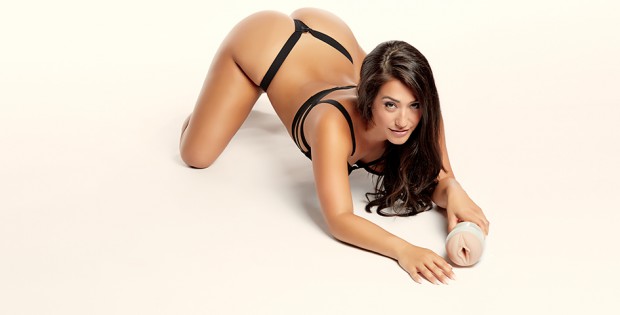 Eva Lovia is officially the latest Fleshlight Girl with her custom molded male masturbator sleeve now available. Lovia has been around in the adult industry since 2010 but she has gotten a lot more popular recently and because of starting girl/girl scenes and most recently in 2015 stepping into boy/girl scenes. She is the latest addition to Fleshlight’s range, joining the likes of Tori Black, Lisa Ann and Alexis Texas.

Lovia was named Digital Playground Star following an audition with adult star judges Keiran Lee, Dani Daniels and Nikki Benz. The adult studio says it is thrilled about the subsequent cross-promotion with Fleshlight.  “Being a Fleshlight girl so early in my career is surreal,” Lovia said. “I’m on the same site as girls like Tera Patrick and Asa Akira; it’s incredible and such a powerful feeling to know I’m one of the few girls that has had the honor of getting my holes molded for the pleasure of my fans!”