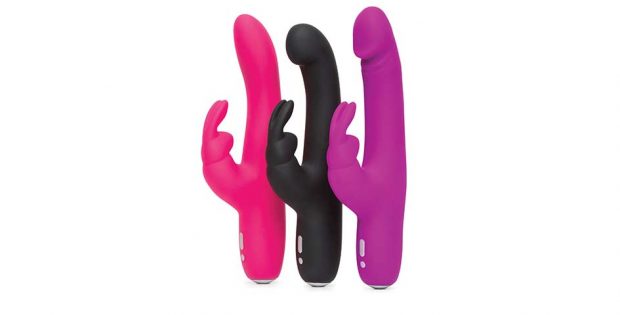 Lovehoney is delighted to announce that its range of slimline Happy Rabbits are now shipping. The release of the range comes weeks after a study revealed more excitement was achieved when playing with a Happy Rabbit.
Conducted by neuroscientist Dr Nicole Prause, founder of sexual biotechnology firm Liberos, the purpose of the scientific study was to test the effectiveness of the updated Happy Rabbit versus manual stimulation.Nineteen women to date, with an average age of 31 and a wide range of racial and age diversity, have been tested. Each of the women visited the lab twice under strict lab conditions – once to use a Happy Rabbit vibrator, and the other to masturbate using their hands.Dr Prause discovered that excitement levels and measures of orgasmic sensations were all reported for a longer period of time when using the Happy Rabbit, and for some women, their alpha brainwave levels were also higher.The Happy Rabbit vibrators lived up to their names with the emotional response from the study suggesting that women who used them had higher levels of excitement, longer-lasting orgasms and more desire to play from start to finish, during testing, than the hand-based session. Not only did the women experience heightened feelings of sexual arousal when using the Happy Rabbits, they were also more likely to experiment with different techniques and functions to take them to that special place, as opposed to when using just their hands.

Tags:Toys, Vibrators
Back to Front Page