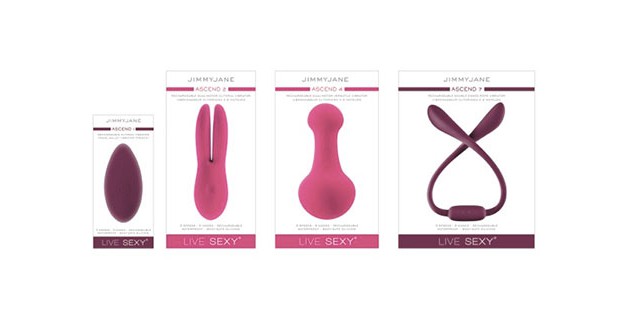 Jimmyjane gave a preview of their newest introduction to the LIVE SEXY Line, showing four new ASCEND Vibrators. The new ASCEND products fall into the mid-tier range, yet they offer more advanced designs and functionality that falls somewhere between the brand’s INTRO and FORM products. The line will be officially released in July.

“The whole idea is to create a more robust and diverse product offering for new audiences, while maintaining a sense of continuity from design language and ethos of Jimmyjane’s flagship FORM line,” stated Robert Rheaume, President of Jimmyjane. “The new ASCEND Line is intuitive yet modern in their designs. We believe there are customers looking for different levels of price and functionality and we want to offer quality options for everyone.”