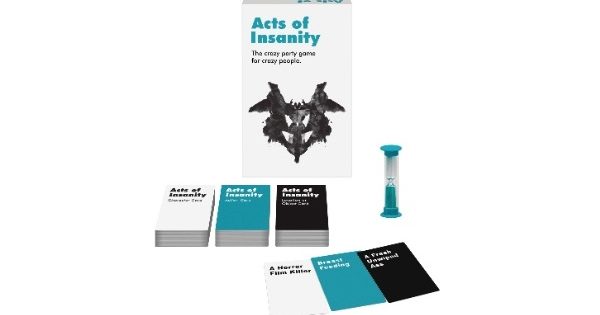 Kheper Games announced the official launch of their new party game: Acts of Insanity, a game for 4-12 players. Acts of Insanity is a party game for crazy people that combines their game Adult Charades with raunchy question and answer via game card style games. Players divide into teams of two and take turns selecting adult scenarios for the other team to act out. The player who receives the scenario, has two minutes to get his team to guess the scenario. If the team guesses the scenario correctly, they win a point and 10 points wins the game.

The fun and humor are within the content of the cards for the adult scenarios. Each team takes five of each type of card to review: Character Cards, Action Cards, and Location or Object Cards. The team selects an entertaining scenario using one card of each type, such as “A Horror Film Killer” “Breast Feeding” “A Fresh Unwiped Ass” and gives it to the opposing team’s player who is taking the turn. That player can then act and speak anything he (or she) wishes, except the words on the card, his (or her) team must first guess the character, then the action, and finally the location or object.

“We are very pleased to present this original game idea while witnessing a huge jump in interest in adult party games lately,” explains CEO Brian Pellham. “We strive to offer new, fun and exciting ideas with clever twists on core game concepts, in all the games we create. The amazing reception this game received at ANME last weekend shows that people are ready for something new in adult games.”