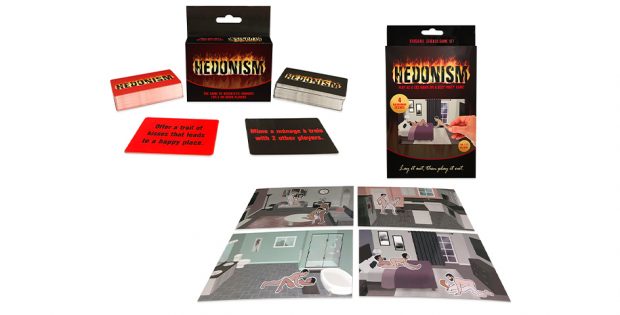 Kheper Games, Inc. is proud to announce two new games that make up their new Hedonism line, Hedonism Card Game and Hedonism Game Set. Hedonism helps us celebrate as we come out of the pandemic with this line of games that can be played by a couple, as a party game, or as a sex party game. Both can be played with any couple or any mix of gender groupings.

Hedonism Card Game has two decks of cards. The red deck has sexual actions that a couple can play with to enjoy foreplay and sexual activities with each other. The black deck is meant to be played as a flirty and fun adult party game. If you are looking for hedonistic hookups, combine the two decks together and play with whatever size group you want to get naughty with. All cards are gender neutral.

Hedonism Game Set includes four room cards and 12 reusable body stickers. There are 6 male stickers and 6 female stickers. The stickers are naked and the male ones are noticeably turned on. Any couple can play by using half of the stickers for their gender. When playing with a group, each player takes one or more stickers to represent himself or herself. To play, take turns laying out the stickers in the various rooms. Then, act out the positions you create. If playing as a party game, you can act out the positions with some clothing on if you don’t dare to get so naughty.

“Hedonism addresses the needs the fans of our games have to go out and get naughty again!” explains CEO Brian Pellham. “Of course, we want people to be safe, be vaccinated, and play safe with these games. They are timed to help us celebrate as we come out of the pandemic and build upon the success we’ve seen with our equally flexible Let’s Fool Around line.”

As described on Wikipedia: “Hedonism refers to a family of theories, all of which have in common that pleasure plays a central role in them. Psychological or motivational hedonism claims that human behavior is determined by desires to increase pleasure and to decrease pain. Normative or ethical hedonism, on the other hand, is not about how we actually act but how we ought to act: we should pursue pleasure and avoid pain.”