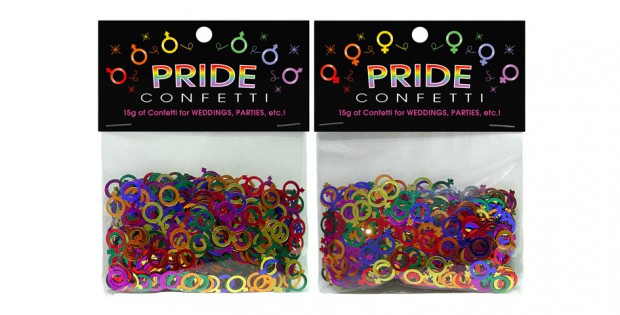 Kheper Games, Inc. has announced that they have launched two new items: Pride Confetti – Male and Pride Confetti – Female. Each packet comes with 15 grams of confetti in either male or female symbol shapes in the colors: red, orange, yellow, green, blue, and purple. They are targeted to be decoration or to throw at gay and lesbian events, including marriages, last night out parties, pride parties, birthdays, or any other event where groups of LGBTQ friends and family may gather.

“We’ve had many requests to add more products to our line now that same sex marriage is legal in the U.S.,” explains CEO Brian Pellham. “The confetti felt like a good fit for us, since we also have Gay Sex! and Lesbian Sex! card games, the latter of which was featured in the last episode of The ‘L’ Word. Also, the rainbow is symbolic of everyone in the spectrum of sexuality, so the flexibility of these two versions allows for them to be easily mixed together as well.”

Tags:Accessoires, Gay
Back to Front Page