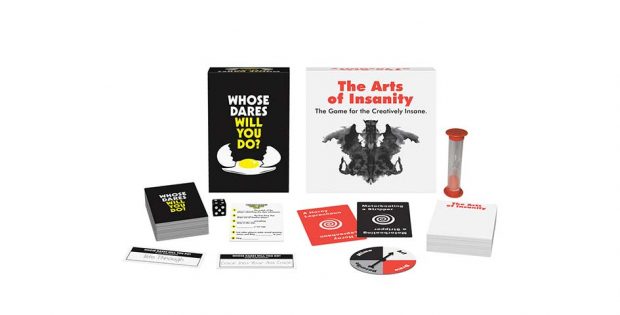 Kheper Games announced the launch of two new party games: The Arts of Insanity and Whose Dares Will You Do? The Arts of Insanity is an extension of the award-winning hit, Acts of Insanity, which Kheper Games launched last year. The humor is similar in that teams select raunchy scenarios for a player on another team to get his team to guess. For example, a team could review their cards and select the character “A Horny Leprechaun” carrying out the action “Motorboating a Stripper”. A player from an opposing team, then has to either describe, act, draw, or mime the full scenario to his team. If he gets them to correctly guess the full scenario within two minutes, that team wins points. Points very depending on the “Art” the person selects with “Describe” earning the least points and “Mime” earning the most. The game includes: 100 Character Cards, 100 Action Cards, a 100-page notepad, a 2-minute timer, a spinner and instructions.

Whose Dares Will You Do? is the most extreme dare game ever. A player rolls the die to select a dare from one of the dare cards. Each dare has a blank space that other players will fill and create dares they hope the player will not do. For example, “____________ a raw egg.” The other players write out their dare submissions and the prior player reads it to the new player.  Examples in this case could be “Bite through”, “Moisturize” and “Crack into your ass crack”. The player then decides which dares he will do and carries them out. He gets a point for each successful dare and anyone who submits a dare he will not do, also gets a point. The game includes: 100 Dare Cards, 300 Dare Submission Papers, a die, and game rules.

“Party games with adult content are trending very strongly right now,” explains CEO Brian Pellham. “We first created an adult humor game in 2001 and have continued to see this category of product build exponentially over the years. Adults want to play games too, and not just family games, but games that entertain themselves and their party guests.  It’s an immensely fun category to be a part of and we are thrilled here at Kheper Games to continue to be the leader in adult party game entertainment.”