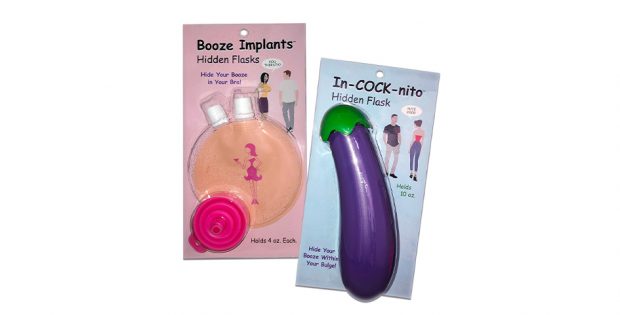 Kheper, Inc. is formally launching two flasks to their quickly extensive barware line.  Booze Implants are two 4-ounce flasks that are designed to be hidden in a woman’s bra. In-COCK-nito flasks can be hidden in a man’s bulge by either being placed properly in a pocket or directly inside a snug pair of underwear.

Kheper Inc. (Also known as Kheper Games, Inc) is releasing these flasks to coincide with a return to sporting and other events as states and countries are opening up more fully. The flask are hidden in places that others will want to look but dare not touch. They are made of mylar and plastic, so they do not set off metal detectors. They are great for when you go to a sporting event, family event, party or club. Any time you want to sneak in a little extra booze as the only time they will be noticeable is through a full body scan at airport security.

“We are super excited to be launching the adult items and they were two of our most successful new items at ANME this past July.” explains CEO Brian Pellham. “I also personally had fun using our early samples at a Mariners game here in Seattle. I tucked the In-COCK-nito flask into my boxer briefs and a female friend had the Booze Implants in her bra. We went through security without even an odd glance from anyone and had a lot of fun pulling off our caper.”

Tags:Gadgets
Back to Front Page