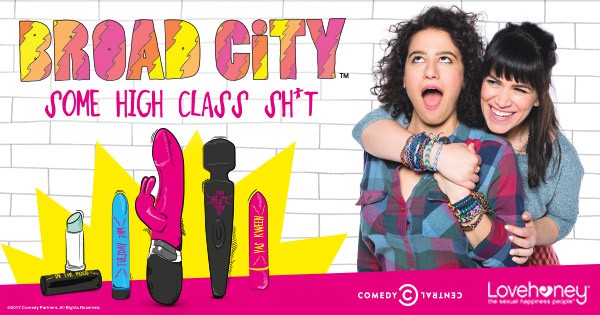 Lovehoney has announced its latest brand partnership with the US hit comedy series Broad City. This is the first time that Lovehoney has partnered with a TV show; the current portfolio includes rock bands, (Motörhead, Mötley Crüe) fashion brands, (tokidoki), Sex experts (Tracey Cox) and of course, Fifty Shades of Grey. Broad City is courtesy of the collective brains of and starring Abbi Jacobson and Ilana Glazer. It is an odd couple comedy about two best friends navigating their twenties in New York City whose adventures always lead down unexpected and outlandish paths. The show is noted for its frank and funny portrayal of sex, and has featured many sex toys, including a memorable scene that introduced pegging to a mainstream TV audience for the first time. Lovehoney says the range of irreverent, colourful items will appeal to Broad City’s extensive fan base as well as first time users.

Neal Slateford, Lovehoney Co-Founder, said: “For us working with a show of Broad City’s calibre was a no-brainer and we’re delighted to be working with Comedy Central. The range perfectly encapsulates what the show is all about: fun and energy. We’re delighted with how the products represent Abbi and Ilana’s humour, with each item harking back to hilarious episodes in the girls’ lives. The hero products for us are the kegel balls, Nature’s Natural Pocket: fans will know the exact moment in the show that these pleasure balls, with their secret ‘stash’ pocket is all about.”

Steve Raizes, SVP Consumer Products for Viacom’s Global Entertainment Group, noted: “Comedy Central is thrilled to team up with Lovehoney on this collection that expresses the bold, unique and sex-positive voice of ‘Broad City. We are excited to bring these innovative and high quality products to fans of the show.”

The products have been designed and developed in-house as has all packaging, POS and brand marketing collateral.

Kate Hodgson-Egan, International Sales Manager comments: “We are delighted the Broad City range is finally here! We cannot wait to showcase the range to our committed customers in the US who have been so supportive of our licensed ranges. First up on the Broad City Tour is ANME in Los Angeles. The new season of Broad City premieres in the US on the 23 August so get your orders in as soon as possible.”

Broad City will be showcased at stand no ##55-57 at ANME. For more information please email enquiries@lovehoneytrade.com.

Tags:Licensing, Toys
Back to Front Page