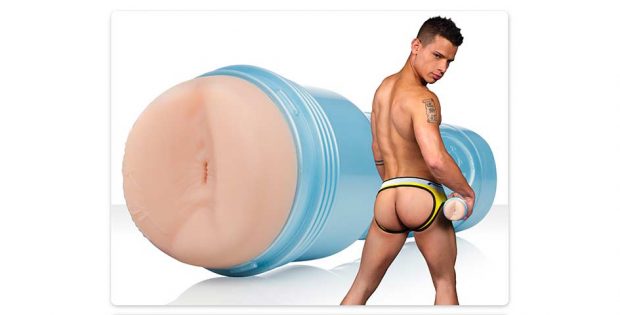 Brent Everett  is a Canadian gay pornographic film actor and director. Since 2003,  he has appeared in over 40 pornographic films for a variety of studios in the United States. He and Brent Corrigan are the Fleshjack’s Boy with the highest demand in Europe.
The new Ecstasy canal provides an effective penis massage with frequent alternation of gentle and heavy stimulations, accompanied by a steadily increasing and decreasing tightness sensation. The overall stimulation is additionally enhanced by a vigorous suction effect. The texture was inspired by Brent’s double armband tattoo; the name was inspired by the pure lust Brent brings out in all of the boys. Penetration into the entry passage of the Ecstasy canal is accompanied by a pleasantly tight sensation. The penis then reaches the middle of the first chamber and at this point the single cross rib slides pleasurably tight over the penis head, creating a very noticeable stimulation. The wavy constriction at the passage to the next chamber acts as a soft cushion and strokes rather gently over the surface of the penis head. After that, men feel the double cross rib in the middle of the second chamber, which also generates compact and intensively smooth stimulation effects upon pass through that are even more intense than in the first chamber. This is followed by a short and gentle relaxation phase between the chambers up to the next double cross rib inside the third chamber, which again generates very noticeable stimulations. In this way, a continuous alternation between single heavy stimulations and gentle stroking emerges, accompanied by repeating increasing and decreasing of the tightness sensation which, in its entirety, results in a fantastic massaging effect on the penis surface.

Tags:Masturbators
Back to Front Page