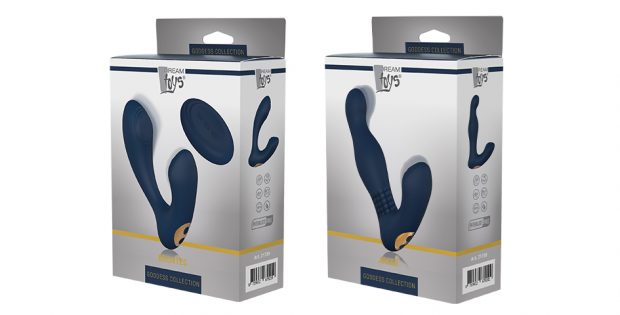 As the Goddess Collection proved to be major success and is selling very well, Tonga extended this Dream Toys range with two more toys. The new additions are Brontes and Arges, versatile vibrators with two motors each that drive sevenvibration patterns and three speeds. They are made of solid silicone and ABS and both are IPX7 waterproof and USB-rechargeable. Their design is in line with the rest of the Goddess Collection: dark blue silicone with gold coloured accents and a matching packaging.

Apart from the vibrations, Brontes also offers pulsating waves functions, that are available in seven patterns and threespeeds too. The toy is flexible because of the narrow neck, and Brontes’ soft spot at the top transfers the pulsations perfectly. The shortest part of this stimulator transfers the vibrations the most intensely. The vibration functions and pulsating waves functions can be used at the same time or separately. Brontes comes with an easy to use remote control.

“We hope that these new vibrators will turn out to be just as successful as the previously released Goddess Collection products,” the company states.