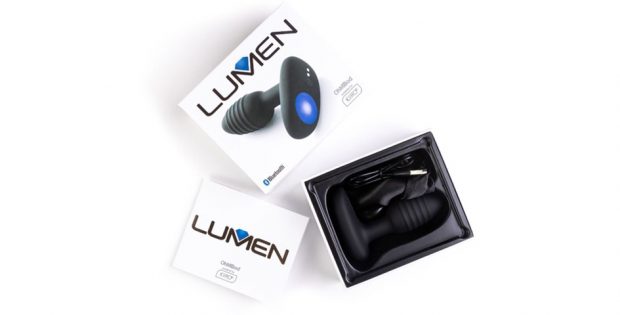 One of the most exciting partnerships in sexual health tech has delivered another showstopper with the OhMiBod-KIIROO release of the Lumen LED pleasure plug. The Bluetooth enabled plug is the fourth product developed as part of this international collaboration, joining the OhMiBod Fuse, Esca, and Esca 2.

Every aspect of Lumen’s design is geared toward maximizing pleasure. The new plug features OhMiBod’s Velvet Wave cushion comfort technology, as well as external ridges for the perfect amount of friction. It also provides visual feedback with a diamond-like LED light that syncs with the plug’s vibrations and turns the bedroom into a stage.

“OhMiBod’s partnership with KIIROO began from a desire to shape the future of intimacy with toys that connect people from anywhere in the world,” said OhMiBod founder Suki Dunham. “The Lumen is the next step in that evolution. Its visual feedback helps unlock new levels of intimacy for couples and interactivity for anyone separated by distance.”

Like other Bluetooth enabled OhMiBod and KIIROO vibrators, Lumen is controllable from any distance through the OhMiBod Remote App and KIIROO’s mobile App.
Through OhMiBod Remote App, users can activate OhMiBod’s signature Club Vibe functionality and “feel the music” while listening to their favorite songs. The app also features real-time video calling, in-app chat and photo sharing, orgasm tracking and notifications, and independent volume and vibrator intensity controls. The Apple Watch version of OhMiBod Remote App features their patented Pulse mode where vibrations are driven by the wearer’s heartbeat. When connected to KIIROO’s mobile App, Lumen can pair and connect with other KIIROO toys for shared, simultaneous passion—at any distance. The app also connects to webcams and virtual reality content and can sync with encoded videos.

“Lumen delivers app-controlled couples play, visual feedback, and sound-driven vibrations—all in one toy. There’s nothing like it on the market today, and only a collaboration between OhMiBod and KIIROO could have made it possible,” said Toon Timmermans, KIIROO CEO.

OhMiBod Lumen, powered by KIIROO, is waterproof and USB rechargeable and includes four manual mode vibration patterns for use without the OhMiBod and KIIROO apps.

Tags:Plug
Back to Front Page