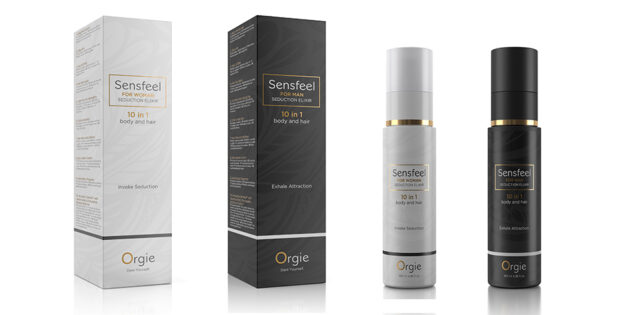 The impressive success of the pheromone perfumes Sensfeel for Man and Sensfeel for Woman marked the beginning of this new line from Orgie, which now features a 10 in 1 hair and body elixir in both men’s and women’s versions.

Sensfeel For Man Seduction Elixir 10 in 1 is the answer to many appeals that Orgie has received to develop a 10 in 1 pheromone elixir for the body and hair tailored for men. Formulated with the natural-based active ingredient Sensfeel For Him combining the same elegant fragrance as Sensfeel perfume with ingredients that make this product what men have been waiting for. “Orgie has finally delivered on its promise to the male audience, they’ve been asking for a product like this for a long time and as we were developing the Sensfeel for Man perfume it was clear to us that a 10 in 1 elixir for body and hair mirrored in this perfume would result in a quality and sophisticated product for which it was worthy waiting for. Cheers!” Raquel Shaw, Head of PR, Orgie Company, says.

The ever best-selling The Secret Elixir Seduction 10 in 1 led to the development of Sensfeel for Woman Seduction Elixir 10 in 1 for body and hair, which also had its share of suggestions popping up in the trail of the perfume Sensfeel for Woman. Why if both are pheromones products, with similar fragrance and functions, one may ask. “Because they are completely different products, their formulas and active ingredients are completely distinct from each other. Aside from their formulation, the pheromone mechanism of The Secret 10 in 1 Seduction Elixir is provided by nano particles while the pheromone mechanism of Sensfeel for Woman Seduction Elixir 10 in 1 is provided by the natural-based active ingredient Sensfeel For Her through the interaction two of its components – White Jasmine (Jasminum officinale) and short-chain fatty acids (SCFAs) derived from Carob (Ceratonia siliqua) – which results in mimic of the copulin.”

Sensfeel Seduction Elixir 10 in 1 are outstanding hair and body products to be used solo or in duo with their counterpart Sensfeel perfumes.

Tags:Cosmetics
Back to Front Page