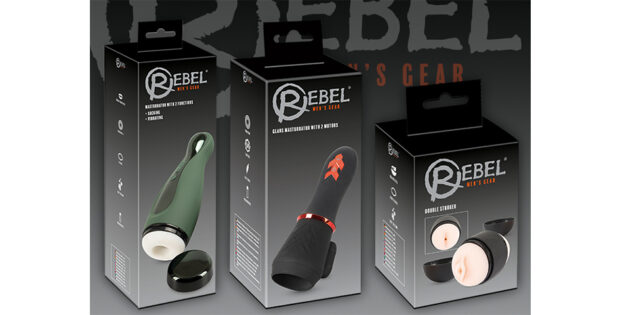 The sex toys from REBEL have a distinct, manly design and have been created specifically for men. Three new masturbators have now been added to the extensive REBEL assortment.

The ‘Glans Masturbator with 2 Functions’ is perfect for pleasuring the tip of the penis directly. The compact and very easy-to-hold masturbator pleasures the glans and frenulum directly with thrilling vibrations and numerous soft dots and grooves. The 2 motors have 10 vibration modes which provide a lot of variety. The vibration modes can be easily adjusted with the button on the toy. The masturbator can also be used in the bath or the shower because it is waterproof. The masturbator is covered in a velvety soft touch texture which feels great against the skin during masturbation. This light (126 g) masturbator is also small enough to fit in most bags – perfect for a quickie on the go and in between times. It can be recharged with the included USB cable.

The ‘Masturbator with 2 Functions’ sucks and vibrates to provide intense solo pleasure. The 6 vibration modes and 3 suction modes provide pleasurable variety and can be adjusted with the button on the toy. The sleeve has numerous soft massaging dots and grooves inside. The sleeve can also be removed for cleaning. The included lid means that the masturbator can be stored discreetly and protected from dust. It can be recharged with the included USB cable.

The easy-to-use ‘Double Stroker’ is perfect for hot action alone or with a partner. The masturbator is open at both ends – there is a vagina opening at one end and an anus opening at the other end. The masturbator has a soft, realistic sleeve which stands out because of the intense dots inside the pleasure canal. The case can be opened at both ends and the sleeve can be removed which makes quick and hygienic cleaning possible. The openings at either end and the easy-to-hold, sturdy handle in the middle of the sleeve mean that it won’t slip easily and can also be used during a blow job. The two lids mean that the sleeve is protected from dust and dirt – it also means that the masturbator can be stored discreetly as well.

All the REBEL products are delivered in a high-quality cardboard box that also has a description of the product in various languages on it as well. The packaging can also be stood up or hung up with the hanger in the middle. More products will now fit into the sales space because they’re more compact. They also take up less space when they’re in storage as well.

Tags:Masturbators, Wholesale
Back to Front Page