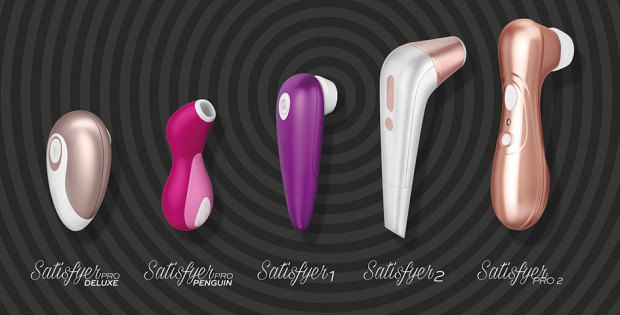 Satisfyer will be offering its pressure wave vibrators starting in the end of October. They have been designed and developed for every target group and almost every budget by one of the most renowned product designers in Europe. The retail price of the total of five Satisfyer models ranges from 39.99 Euros to 89.99 Euros, which is the price for the Satisfyer Pro 2 top model.

For all Satisfyer models liquids, lubricants or water don’t remain in the hole in the head of the device and therefore don’t partially remain in the interior, the so-called second chamber. The Satisfyer technology doesn’t need this second chamber. “Our technology – with one single chamber and a large opening – enables the removal of incoming liquids, lubricants or water, and is therefore hygienic and safe!”, says Dr Karen Maeder, product developer.

“Following the incredible success of Satisfyer Pro 2, in particular after the whisper mode that had been launched shortly before, we would like to offer our leading technology to an even broader target group. For this, we have aligned our design, price point and sales markets to satisfy the various requirements,” says Jerome Bensimon, Vice President of Sales for Satisfyer. “For instance, with a retail price of 69.99 Euros, our playful Satisfyer Pro 2 Penguin design targets customers who are young and demanding, yet cannot easily afford 100 Euros for a high-end toy.”

Satisfyer is particularly proud of the fact that, as of immediately, it can offer the technology in two devices for 39.99 Euros and 49.99 Euros respectively using standard batteries. They expect that these two designs will ensure significant sales in emerging markets such as Asia, Eastern Europe or South America.

“On the other hand, we have our rechargeable Satisfyer Pro 2, Pro Deluxe and Pro Penguin models, which have a retail price of 89.99 Euros, 79.99 Euros and 69.99 Euros, also consisting of a sophisticated design, innovative technology, high margins for specialist trade and even more affordable prices for customers in the key markets such as Europe, Japan, Australia, Canada, USA, and South America,” says Sabine Schuchardt, Head of Sales in Europe.

Tags:Satisfyer, Vibrators
Back to Front Page