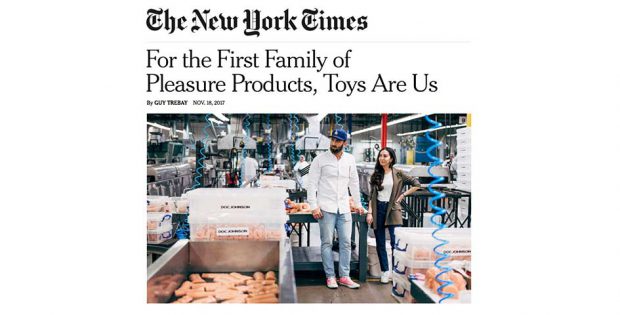 Doc Johnson has been featured on the front page of The New York Times Sunday Styles section this weekend, for an in-depth profile entitled, “Making Sex Toys is a Family Business”. Written by esteemed journalist Guy Trebay, the above-the-fold cover story highlights Doc Johnson’s origins and continuing legacy as a family business.

In the article, Trebay details how “Doc Johnson became “the largest producer in what is estimated to be a $15 billion global industry”, and notably dubs “the Bravermans—Ronald, Chad, and his sister Erica, 29” as “the first family of sex toys.”

The New York times piece also emphasizes the importance of Made in America manufacturing to Doc Johnson’s legacy, noting that “almost 75 percent of Doc Johnson products are manufactured in one of seven structures scattered across a sprawling 250,000-square-foot compound” and that generations of Doc Johnson employees have “raised families on wages earned fabricating devices like Doc Johnson’s best-selling Sasha Grey Masturbator.”

In addition to covering the Doc Johnson family business, The New York Times article also celebrates some of the pioneering women who have pushed the pleasure products industry forward, as well as pop culture moments that are helping to shape the next generation’s attitudes towards sex toys, noting that “as seemingly everywhere else in the culture, it is a millennial generation that is leading the charge in mainstream acceptance” of the pleasure products industry.

Doc Johnson COO/CCO Chad Braverman said, “The New York Times has one of the largest readerships in the world, so it’s a monumental achievement to be featured in this publication – not just for Doc Johnson, but for the pleasure products industry as a whole. We couldn’t be more proud of this authentic and honest portrayal of our family business, and we’re excited, honored, and humbled to be featured in The New York Times as a pleasure products company that is breaking boundaries and innovating as an American manufacturer, to help push our industry forward.”