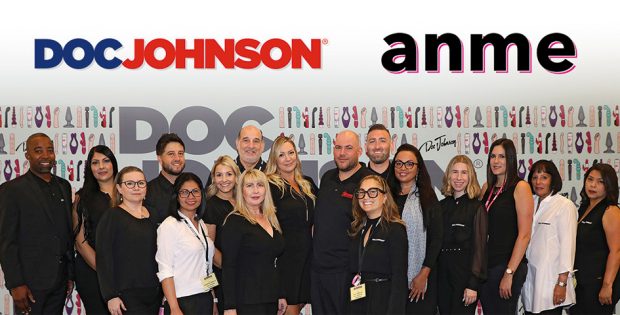 Doc Johnson is delighted to report another successful ANME Show. The company debuted more than 50 new SKUs at the show held from July 15-17 in Los Angeles.

“We’re thrilled to announce the new TRYST v2,” Cheryl Hanslip, Director of Product Development at Doc Johnson, said. “This update stays true to the shape and feel of the first version, but it has new features which provide a brand-new experience.” Those new features include bendable arms, which create a variety of different play options, and a wireless remote for hands-free play. TRYST v2 will be available in purple, teal, and mint.

Attendees were also excited for four new Delay Wipes for men. OptiMALE So Hard which is currently available in a cream and spray form is now available in single-use, disposable wipes. This allows for maximum play while delaying the onset of orgasm. In addition, Doc Johnson turned its Proloonging, Power+, and Sta-Erect creams and sprays up a notch in wipe form. The Proloonging wipe has added ginseng to its formula; Power+ has yohimbe, and Sta-Erect boasts real pheromones.

Doc Johnson is also bringing some of the Main Squeeze success to Pocket Pussies—Sophie Dee, Ariana Marie, Lela Star, and @playmateiryna will all be available in both lines.

Silicone-Covered Metal Cock Rings are a new, exclusive design by Doc Johnson for Kink. The C-Rings are flexible and slightly stretchy due to having an open metal ring inside, and they’re available in 3 standard sizes: 35 mm, 45 mm, and 50 mm.

Silicone Wrist and Ankle Cuffs in Kink’s signature red and black colors are exclusively designed by Doc Johnson as animal-free alternatives to traditional leather cuffs. They come with Kink-branded padlocks and built-in clips which can attach to other restraint accessories, such as Kink’s new All Access Silicone Hogtie. The hogtie has four clips, ideal for binding ankles to wrists.