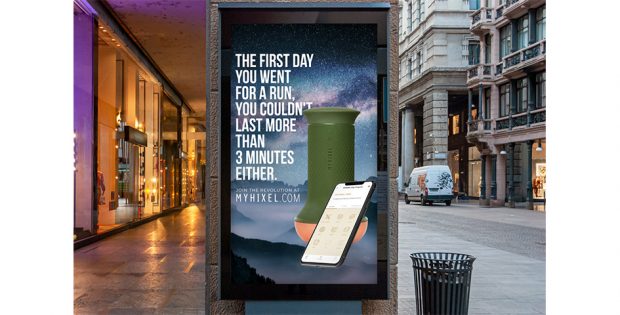 To raise awareness in society about the importance of sexual wellbeing to enjoy a full life and to promote a male sexual revolution by breaking taboos, MYHIXEL, a company specializing in male wellbeing, has launched its first outdoor advertising campaign which, with different activations in various media, seeks to connect with men and their partners in an original and eye-catching way.

The campaign, created by CYW, will have a presence in outdoor advertising with a banner on Gran Vía 14 (Madrid), as well as in other static and digital media, both in Madrid and Seville. The media agency in charge of the campaign will be NFcomunicación.

With a simple design and through various easily-recognizable similes, the campaign invites the public to reflect on sexual relations and the importance of being aware of the role of men in them.

The main creative will be placed on a canvas in Madrid, on Gran Vía 14, and under the phrase ‘The first day you went running you didn’t last more than 3 minutes, it makes a wink to the duration of sexual relations and the importance of training. In this context, MYHIXEL MED is cognitive behavioral therapy for ejaculation control designed for men who ejaculate in less than 3 minutes. With solutions like MYHIXEL, the duration of intercourse can be multiplied by up to 7 times.

Other creatives such as ‘We provide the game, you provide the joystick’ highlight some of the key features of the MYHIXEL devices, as they are based on gamification and invite users to learn about and improve their sexuality through a video game application combined with the MYHIXEL I devise. Other creative concepts developed in the campaign such as ‘Think about your partner, not your football line-up’ highlight fundamental values for the development of full sexuality, such as complicity and sexual enjoyment as part of healthy and satisfying relationships.

The campaign started on Wednesday 31 March and will run until 18 April. The starting signal will be given by a banner that will be placed on Gran Vía 14, under the claim ‘The first day you went for a run you didn’t last more than 3 minutes’. From that day on, the campaign will be placed in static and digital kiosks and from 5 April there will be digital mupis in the Seville and Madrid metro.

Tags:Advertising, Promotion
Back to Front Page