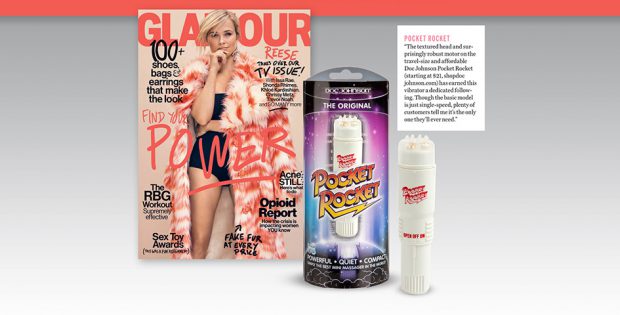 Doc Johnson’s COO/CCO Chad Braverman said, “We’re very excited that our Original Pocket Rocket was recognized by Glamour as one of the best pleasure products in the world. The Pocket Rocket debuted in 1993 when we noticed that the market was lacking a vibrator specifically designed for clitoral stimulation; and to this day, women and couples all over the globe swear by its compact form and ultra-functional design. Today, the Original Pocket Rocket remains one of the best-selling, best-performing pleasure product in Doc Johnson’s history, and the fact that Glamour’s write-up perfectly echoes our vision of the product is extremely gratifying.”

Doc Johnson’s VP of Sales and Marketing, Scott Watkins, added, “Based on the incredible buzz and demand we’ve seen from consumers and retailers via all of our media placements thus far, we expect this campaign to have a similarly strong influence in driving consumers to stores. Our Original Pocket Rocket is currently in stock and ready to ship– we recommend that our retail and distributor partners stock up as quickly as possible to capitalize on this latest endorsement.”