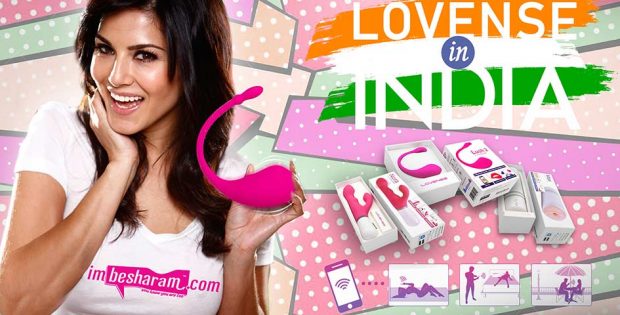 Lovense and Besharam, an Indian Adult Store, have come to an agreement to bring the entire range of Lovense Toys – The Lush, Lush 2, Nora, Max, Hush, Ambi, Edge, Domi & Osci to India showcased on IMbesharam.com

As per Economic Times of India, the India sex toys market was an unexplored and unexploited $360M size in 2015, going to double by 2020. India has over 400M Internet users and approximately 65% of the population is under 35 years of age. In the last few years, talking about sex and using sex toy has become more and more acceptable and shown in mainstream movies like Lust Stories and Veerey DI Wedding which led to a 300% increase in sales for vibrators, specially by women customers on IMbesharam website.

The laws in India have been vague and not clearly defined, but as per experts, the sale and distribution of toys is not restricted as long as they are not akin to male or female genitalia or obscene looking. Imports to India requires complying with several local rules and regulations which is why only brands and companies that are well ingrained and have the information, resources and the legal support are able to thrive in the Indian market as a adult retailer or distributor.

Besharam which was founded in 2011 and went LIVE in India in 2013 has been a pioneer & instrumental in opening up the adult products category in India. With partnerships and alliances with several major brands like Fleshlight, Rocks Off, Bijoux Indiscrets, Screaming O, Hustler, Tenga, Rene Rofe, Baci, and many more, it has established as the market leader for adult and sexual wellness products in India.

Lovense has India as its third most popular market with several bloggers and social media influencers who have talked about the popularity of its products. The upcoming Indian middle class with upper spending power and brand affinity is a good match for the high quality and advanced tech laden Lovense products. Their choices in fashion, lifestyle and travel make it a very desirable market for Lovense brand and its attractive range of sex tech toys for men, women and couples who like to indulge in long distance romance and foreplay

Joris Guisado, the COO at Lovense said, ‘I believe it is just a matter of time before sex toys get normalized in India though. With the second largest population on the planet and a gdp growth rate of over 7%, India will become an extremely profitable market as soon as the laws and general mindset really opens up to sex toys.’ He added, ‘Everything we do, we do for our customers and we’ve been getting a lot of request in the past from Indian customers that we couldn’t serve. More than the company growth, it is really important to be able to provide pleasure to people anywhere in the world and we are really happy to now be able to offer our products to the Indian people through our partnership with IMBesharam.’ Joris ended by saying ‘I have known Besharam since I joined Lovense in 2016. The first time I met Raj personally was in January 2019 in Los Angeles and it was really easy to reach an agreement and start working together. Even if the market and conditions to create an adult related business in India are really tough, the team behind Besharam have worked extremely hard to position themselves as the current and I believe future leader of pleasure products retailer. It’s an honor to have them offering Lovense line to the India audience’