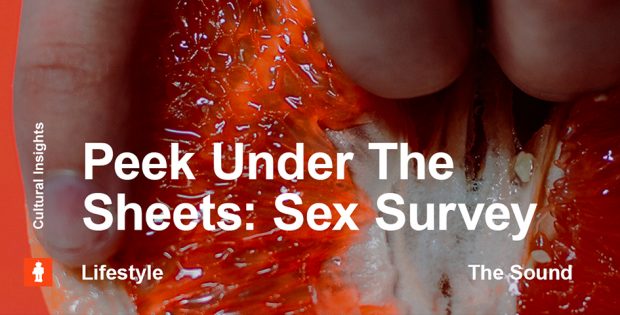 The Sound, a global brand agency specializing in consumer exploration, brand strategy and innovation, has published a revealing study detailing the sex habits of singles and couples during the recent height of COVID-19.

Titled Sex in the Time of Covid-19, the study utilized a mixed-methods approach which included a data remine and a proprietary survey. The team also utilized a series of virtual conversations, speaking to real people to understand how their sexual behaviors and beliefs have been impacted since COVID lock downs took effect in Canada and the United States.

Overall, the results looked nothing like the intercourse-crazy narrative painted by sex toy marketing blogs and sexual health influencers. As it turns out, COVID might not be responsible for the next Baby Boom (or bedroom boom, period) after all.

“We’re really seeing a sexual reset among people during this time, and anticipate that the future will look quite different for most people coming out of this lock down,” says Annie Pecoraro, Director of Creative Analytics for The Sound.

Unsurprisingly, sexual mindsets centered around individuals’ relationship statuses and living situations. Sex in the Time of Covid-19 divided study participants into three groups: single, living separate from partner, and live with partner. The responses received then formed three sexual mindsets as defined by The Sound’s research team: waning desire, desire but no flesh, and exploratory and experimental.

During the course of their surveys, participants were asked to give their sex lives – whether solo or coupled – a star rating from one to five. One to two stars were indicative of a sex life so non-existent and boring that it would “make Jesus proud,” and four to five stars relayed consistency, playfulness, romance and connection.

On average, study participants rated their sex lives at around three stars; not as dismal as feared, though not exactly energized.

Of those who described negative tolls on their desire, some singles reported waning desire due to lack of opportunities to date and regret at having lost the potential to seek a partner. Those with a distanced partner often reported that virtual sex and sexting, which was once a source of anticipated foreplay, now felt completely lackluster.

Some couples also pointed to an increase in arguments and stress melt-downs due to the twenty four-seven proximity of quarantine; another big factor in reducing sexual activity for those with a partner.

On the brighter side, however, was that whether living alone or with a partner, the lock down allowed many people to slow down and explore.

“I think one of the most surprising – and encouraging – findings was that while COVID-19 has definitely had a negative impact on a lot of peoples’ sex lives, there’s no shortage of optimism,” says Pecoraro. “People have some perspective, view this situation as temporary, and many are taking advantage of this time to either get to know themselves and their own desires and pleasure better, or reassess what they want from their partner.”

According to the study, the biggest change noted was the increase in “discussing physical and sexual health with their sex partner(s),” which 32% of respondents expect to do more of after the pandemic.

Speaking directly to the sex toy and sexual health industry, Pecoraro thinks it’s time to seize the moment and bring the conversation about pleasure into the mainstream.

Pecoraro and The Sound team point to several key questions they believe pleasure brands should be asking themselves to enhance connection with consumers:

In conclusion, Pecoraro hopes that individuals can utilize The Sound’s findings as an opportunity to open a more honest dialogue with themselves and their current or future partner(s). Additionally, she hopes that pleasure industry brands can find new ways to reach their consumers and enhance their marketing approaches.

For more information, visit Sex in the Time of Covid-19 to read the fully study and visit TheSoundHQ.com. Press inquiries should be directed to Daria@TheSoundHQ.com.

Tags:COVID-19
Back to Front Page