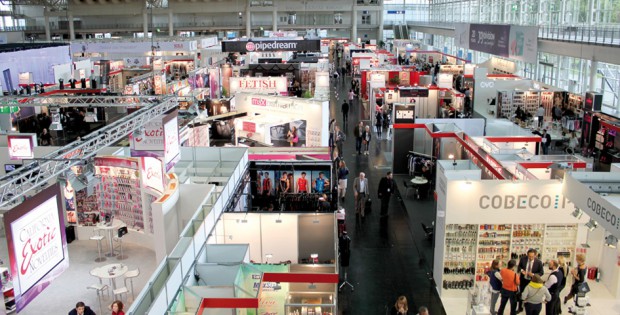 This year, eroFame will take place on October 05 to 07 in Hall 2 of the EXPO fairgrounds in Hanover – the same location that is already set for the eighth eroFame in October 2017. Now, the organisers have invited the industry to decide if the trade convention should leave Hanover/the EXPO fairgrounds after that. Every trade member is invited to participate in the survey.

In January, the headquarters of Shots in the Netherlands became the location of a meeting between the organisers of eroFame and representatives of the “European Association for Suppliers.” This recently founded Association is an umbrella organisation for numerous companies, predominantly from the Netherlands. The organisers of eroFame had already gathered feedback from the industry earlier in January, when numerous producers presented their suggestions for the future of eroFame at ANME Show in Los Angeles.

What became clear from those talks was that several eroFame exhibitors would prefer an alternative location apart from Hanover. The idea that percolated at these conversations was to have every third eroFame take place in another European city with good international flight connections.

This would mean that, once every three years, eroFame would not take place in Germany/Hanover, but in cities such as Amsterdam, Barcelona, Milan, or Paris. As far as the situation in Germany is concerned, eroFame will stay in Hanover, there will be no alternative locations. This has to do with so-called ‘ethical’ concerns expressed by cities such as Frankfurt, Düsseldorf, and Munich for whom adult trade shows are still a red flag. Berlin will not be considered either, since this city is the location of hardcore trade show Venus.

Before a final decision is made on the aforementioned idea – switching the established location Hanover/Germany with another European city – the organisers and the representatives of the European Association for Suppliers have agreed to get more feedback from the industry. This way, they want to establish if there is enough interest to take this idea to the next stage and have a test event in a big European city in April of 2017.

Therefore, all trade visitors of eroFame are invited to provide their opinion on this idea. To that end, a survey has been started and the organizers asks the industry to take the time and participate.

“We need the opinions of as many of the show’s participants and visitors as possible. Only then will we be able to make a decision about these potential changes”, as Wieland Hofmeister pointed out. The questionnaire can be submitted throughout February/March, so the results will probably be available in April. EAN is of course going to keep you informed about all developments on this front.